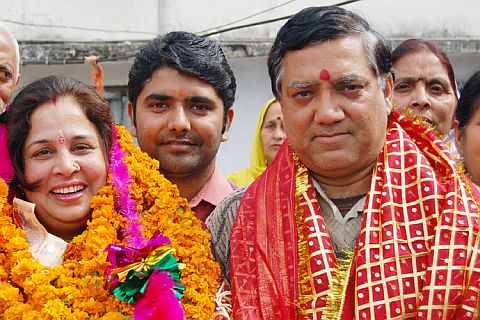 JAWALAMUKHI: In a significant Political development Manisha Sharma a BJP nominee today snatched the chair of President of the Nagar Panchayat of Jawalamukhi in Kangra district of Himachal Pardesh from Congress party.

The SDM Dehra Mamta convened the meeting of Nagar Panchayat where local MLA Ramesh Dhawala, Minister for Food and Civil Supply was also present with his supporters. SDM started the procedings of election but all members elected Manisha unanimously by replacing Babli Sharma without any vote. Babli Sharma was removed from the chair through a no-cofidence motion recently.

The present change is due to lack of cohesion in JawalaMukhi unit of congress party and congress minded nagar panchayat members. Later, while talking to newsmen Manisha Sharma, the newly elected President of Nagar Panchyat, urged the state government to abolish house tax in this holy town. Advocating special status for this age-old town she urged the state government to chalk out a comprehensive plan for its overall development. The state government should bear the financial burden of the Nagar Panchayat by allocating special funds in the annual budget plan of the next financial year. She was of the view that instead of imposing taxes on the people the government should come forward to bail out the Nagar Panchayat from the financial crunch. She demanded the setting up of a high-level committee to study the historical background of the town and bring it on the international map of pilgrimage. This town acquires significance because it attracts thousands of pilgrims daily who come here to pay obeisance in the famous shrine of Jawalamukhi. She said that lakhs of rupees were being earned daily by the government from the visiting pilgrims in the form of donations in the temples and taxes but nobody had ever seriously thought of providing better amenities to the local population.