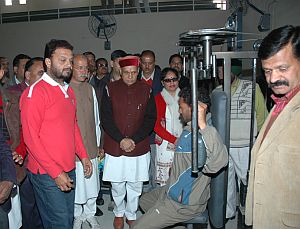 Shimla: A dedication of Rs. 241.72 lakh is made by Chief Minister Prem Kumar Dhumal to the Indoor Sports Stadium to the sports persons of the State having indoor sports facilities of badminton, volleyball, basketball, boxing, martial arts and multi-gym etc. facilities under single roof.

He also said that State Government would encourage sports activities at all-level by creating required infrastructural activities and Rs. 15 crore had been earmarked for spending during current financial year. He said that 17 sports projects were under different stages of completion in the State for which Rs. 8.66 crore had been provided during current financial year. He said that 39 modern sports complex had been constructed all-over the State at a cost of Rs. 14 crore, while indoor stadiums had been constructed at Shimla, Dharamsala, Bilaspur besides Una. He said that the outdoor stadium were under construction at different sub-divisional headquarters to create quality sports infrastructure at that level. He said that swimming pool construction work at Mandi was nearing completion and would soon be dedicated to sports persons.