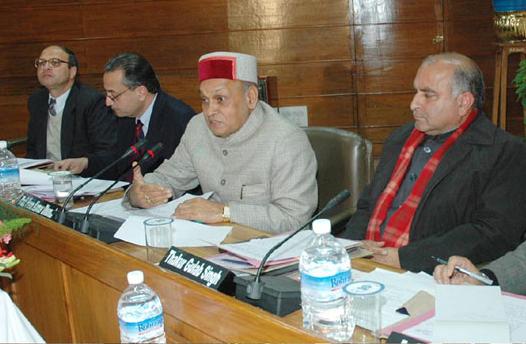 The Eleventh Five Year Plan, beginning from current financial year 2007-08 and ending in the year 2012 has been fixed at Rs. 13,778 crore and the Annual Plan for coming financial year 2008-09 was being proposed to be of Rs. 2400 crore to the Planning Commission of India for approval. This was revealed by Prof. Prem Kumar Dhumal, Chief Minister in his inaugural address to hold discussions with the newly elected MLAs.

Shimla: Chief Minister said that State Government would hold the Annual Plan approval meeting with the Deputy Chairman of the Planning Commission of India Dr. Montek Singh Ahluwalia on 21st of January, 2008 to finalise the same for implementation from 1st April, 2008.

Prof. Dhumal said that every assembly segment of the State would be getting Rs. 3 crore each annually on getting the NABARD funding under RIDF which was likely to be of Rs. 200 crore.

Chief Minister said that the State Government would be continuing with the old practice of including three on-going and three new schemes each in roads, minor irrigation and water supply sectors as prioritized by the MLAs.

Chief Minister requested the MLAs to coordinate with concerned departments for ensuring the feasibility and execution of their priorities.

Ravi Dhingra, Chief Secretary appraised that the 75 percent completed projects were being taken up for completion on priority.