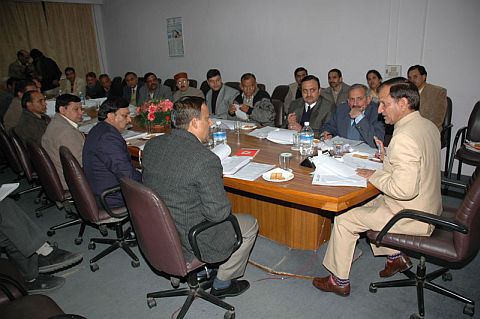 Shimla: Himachal Pradesh Transport Minister Kishan Kapoor today directed the department to take necessary steps to introduce Smart Card Based Driving Licenses and Registration Certificates and to ensure the recovery of Special Road Tax from delinquent stage carriage operators by 31st March, 2008, he said this while addressing a meeting with the officers of the department.

Inspection of the field offices and regular check on them was directed by Mr. Kapoor to the officers in order to stop illegal plying to increase efficiency. He also directed the department to workout a strategy to generate employment for unemployed educated youth besides making all out efforts to redress public grievances on priority.

He further added that there was a need to enter into interstate agreement with neighbouring States besides holding a meeting with the Transport Minister of those States in order to sort out pending issues.

Kapoor said that the department should initiate steps to bring the Inland Water Transport System under regulatory regime of Transport department and directed the officers to implement directions of Hon’ble High Court about installation of weigh bridges at entry points and establishment of authorized testing stations in letter and spirit.