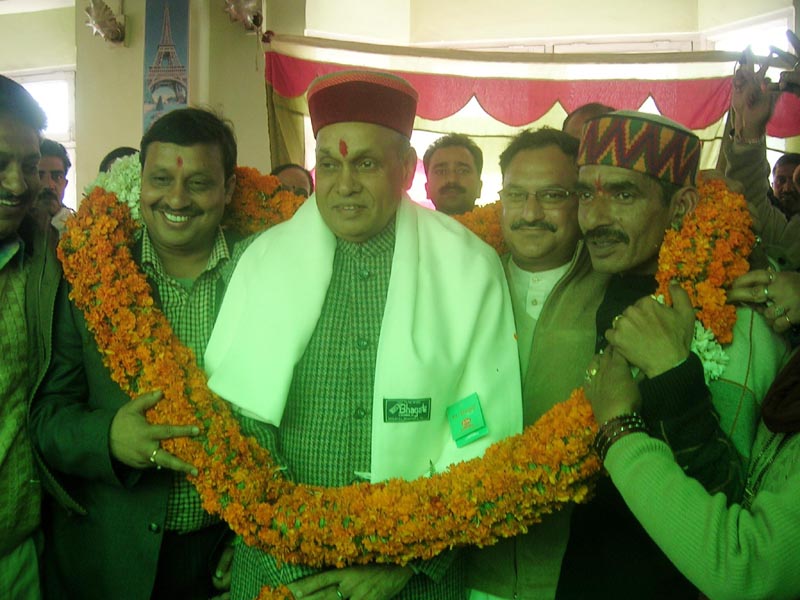 HAMIRPUR: Himachal Chief Minister, Prem Kumar Dhumal today expressed his resolve to implement the party’ election manifesto with an aim to help the people in maximum. The state government had already started a practice in this respect before the formation of full fledged government and about fifty percent of the manifesto had been implemented, he told people in Hamirpur and Bilaspur district today. Addressing a series of public meetings in Bilaspur and Hamirpur district today, he said that the government would provide fifty percent reservation to the women in the panchayati raj institution as against thirty-three percent at resent. He said that women played a major role in society and as such they deserve such treatment.

He said,” BJP government is the government of people and will protect their interests and serve them according to their whims. While corrupt will not be shielded, the innocents will be protected and given their due rights”.

Earlier, he was accorded warm reception right from Shimla to Hamirpur on way from Bilaspur. People garlanded him, offered flower petals and raised Pro Dhumal slogans. Dhumal who was to reach Hamirpur in the afternoon hours reached late despite this, thousand of men, women and children lined up on both sides of the rods to greet him. He was brought to Hamirpur in a big kaffilla of vehicles carrying BJP flags and banners. It was his first visit to his home district after taking over as the chief minister of state on last Sunday.

He said that State Government would protect employees who had been politically victimized and added that directions had been issued to all Heads of Departments to decide all such cases on merit and provide relief to those who suffered. He said that it had already been made clear that there would be no witch hunting and all aspects would be taken into consideration before taking any action in such cases. He also revealed that fabricated cases registered against employees would be withdrawn and added that his Government would not work with ill will.

He said that State Government would formulate PTA Policy by the end of current financial year and added that recruitment would be carried out in different categories on the basis of 50 percent by direct recruitment and 50 percent batch wise.