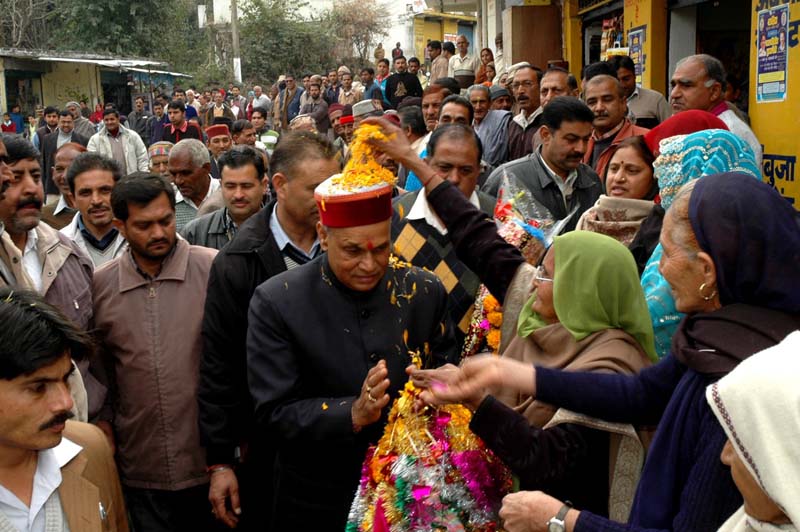 HAMIRPUR: The Himachal Pradesh government is upset with the growing loss to crops every year from the wild animals. It will help the people to end this menace to ensure that crops are fully protected. This was stated by the chief minister, Prem Kumar Dhumal, while addressing a largely attended public meeting in Hamirpur town.

He said that every monkey menace affected district would be equipped with sterilization hospital facilities to achieve the objective of checking growth in their population as also to honor the religious sanctity of the animal. He said that state Government was committed to save the valuable land of the farmers going waste due to the wild animals, especially monkeys.

Chief Minister said that monkey menace had been causing immense loss to the crops of the farmers who were forced to stop cultivating resulting into less agricultural produce in the State. He said that the local youth would be involved in checking the monkey menace which would be trained by professionals to capture the animals and suitable remunerations would be paid to them for their such services. He said that the project would also emerge as a income generating activity for the unemployed rural youths.

Prof. Dhumal said that women welfare would be on top agenda of the State Government and every possible opportunity provided to them to move ahead in all spheres. He said that the decision of providing equal representation in coming Panchayati Raj Institutions elections would yield encouraging results and women would emerge as position in the progress of the State, stating from this grass root level units of democracy.

Prof. Dhumal thanked the people of the State for reaffirming the faith in the BJP and bringing at back to power, since it was well trusted and tried Government which set-up a number of milestone in different section. He specially thanked the people of his home segment Bamsan who voted for him and made his victory by over 26,000 votes. He assured the people that there would be no shortage of funds for development and social welfare activities.