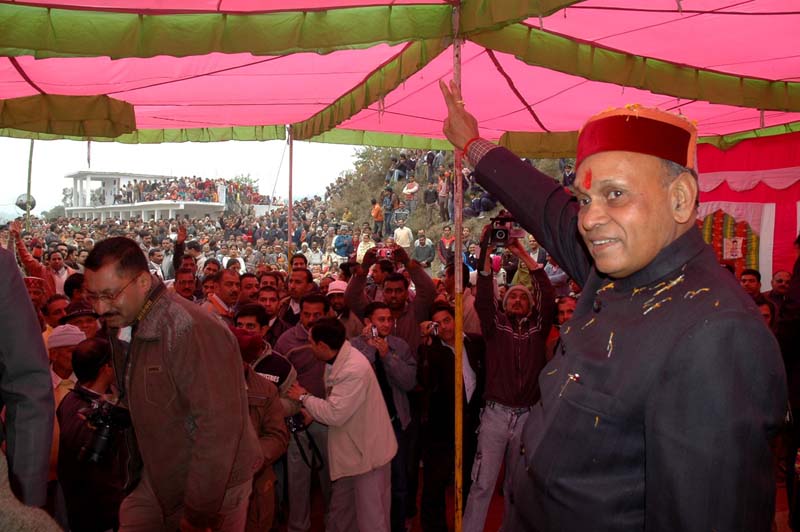 HAMIRPUR: The Himachal Pradesh government is actively considering a proposal to hand over management of religious shrines back to its management on merit, which had been notified and taken under government control after 2003. This was stated by Prof. Prem Kumar Dhumal, Chief Minister while addressing a public meeting at Kallar in Bamsan, in district Hamirpur today.He said that the religious shrines taken under control for political vindictiveness would be handed over back to its management. He said that it was one of the steps towards fulfillment of the promise made in BJP election manifesto.

Addressing a largely attended public meeting at Kallar village in the district today, he said that the Pradesh government is contemplating a plan to formulate a new policy for the construction of roads, providing better educational and health facilities to the people living in rural areas of the state.

Dhumal said since land holdings with the people were less, there was a need to provide them other facilities to stand on their feet. He suggested to the people to adopt horticulture, floriculture and horticulture to get cash crops rather than hankering after white collared jobs. He said that the state government would examine the fertility of the land in the state and for this purpose facility would be provided free of cost by the concerned agencies.

Prof. Dhumal said that the era of corruption, nepotism and political victimization had come to an end with the ousting of the previous government by the electors. He said that the state government had social welfare and development at top priority agenda and execution of the same had already been started from the day one when he took oath of office by enhancing the social security pension and daily wages. He said that the minimum wages Act would be implemented at all level from FIRST January, 2008 onwards thereby enhancing the wages by about Rs. 750 per month.

Chief Minister said that National Rural Employment Guarantee Yojna would be implemented all over the state from 1st April, 2008 since it was already under implementation in Sirmaur, Chamba, Mandi and Kangra districts. He said that with the extension of the programme to entire state every eligible and employment guarantee card holder would be availing of hundred days assured employment in a year and all such persons would be eligible to draw the revised daily wages as applicable to other categories of daily wagers.