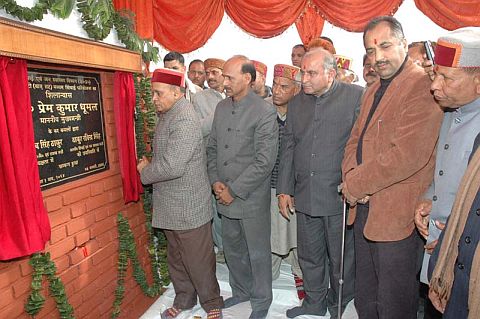 He further added that Balh Valley Left Bank Medium Irrigation Scheme would irrigate additional 2780 hectares of farm land of 67 villages in 17 gram panchayats and Rs. 12.02 crore had already been spent over the first phase of the Scheme which provided irrigation facility to 2410 hectares of farm land in the valley. The completion of the Left Bank Scheme, 5190 hectares of fertile land of the area would get irrigation facilities and to meet the requirements, a minimum of 14.75 cusecs of water and maximum of 29 cusecs would be drawn from the BBMB canal, one cusec from Suketi khad and 7.08 cusec would be made available by boring 18 tubewells, he said. He also revealed that that 33. 52 hectares of land has been proposed to be acquired to execute the scheme.

He also said that his Government would make all possible effort to make the sate a fruit bowl of the country and would cater all the requirements of the fruit growers in the state.

Moreover, he said that every industrial house would be required to incorporate housing plan for their projects alongwith main project proposal to ensure better working environment to the workers to increase their efficiency. 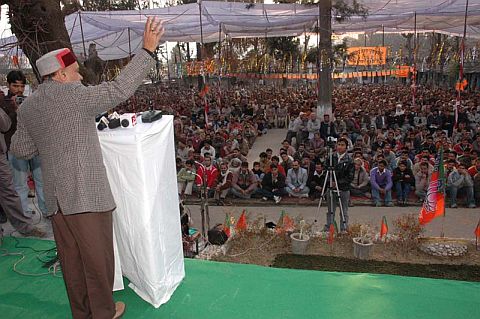 While addressing a public meeting at Bhangrotu in Balh assembly segment of district Mandi he said that the state government would explore the possibilities of setting up of cement plant near Sundernagar by taking best of ecological safeguards and to generate employment and self employment avenues for the people of the area.

He also addressed a public meeting at Bhambla in Sarkaghat Sub Division of district Mandi where he was accorded a rousing reception by the people of the area. There he announced a grant of Rs. 25 lacs to carry out relief and rehabilitation work for the families affected due to floods in Seer khad during last rainy season and assured them to make all possibilities to channelize the Seer khad on the analogy of Swan river channelization project in district Una.

Some MLAs put forward their request to CM like Dile Ram, MLA, Nachan and former Minister urged him to set up cement plant in the area, Damodar Dass, former MLA requested to provide the valley an international airport, solve the silt problem and to open polytechnic in the valley and Jai Chand Thakur, Pradhan, Gram Panchayat, urged for opening of a new tehsil Ner Chowk besides other demands.

Many leaders and officers of various departments were present at this occasion.