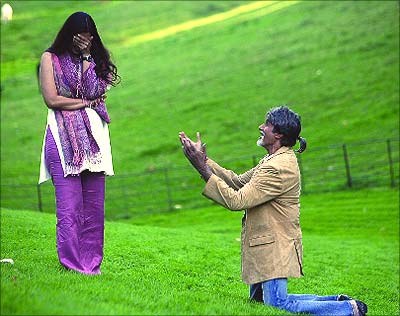 Shimla: These days various websites are talking about the new project of Amitabh Bacchan which is said to be shot in Shimla and Manali.

It is said that the maker of the new movie was interested to repeat the cast of the â€œCHEENI KUMâ€, i.e. Amitabh Bacchan and Tabu but the finicky actress is said to have refused the role and ageless beauty Dimple Kapadia is said to have slipped into Tabuâ€™s shoes.

Hitherto no information is available regarding the name of the new project and its maker. But the cast i.e. Amitabh Bacchan, Diya Mirza, Dimple Kapadia and others are scheduled to arrive at Manali by the end of this month. It is also said that the film will be shot in Kullu-Manali as well as in Shimla.

The internet media says that the movie is all set by one of Indiaâ€™s major corporate houses which is going to be a story of an old couple who rediscover love.
(Photo by Filmikhabar.com of Amitabh Bachan with Tabu in a still from Cheeni Kum)