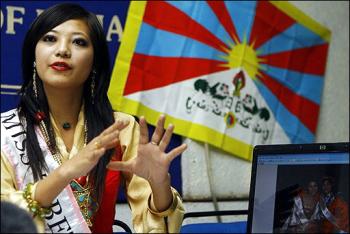 The Tibetan entrant, Miss Tibet 2006, Tsering Chungtak has blamed China for her expulsion from an international beauty pageant in Malaysia. Chungtak, an ethnic Tibetan, currently living in Delhi was competing for the Miss Tourism 2007 competition.

As per Tsering, she didnâ€™t have any political issue but she ousted from the competition when the organizers, under the influence of Chinese government replaced the â€œMiss Tibetâ€ sash with a â€œMiss Tibet-Chinaâ€ sash. Currently, Tibet comes under China and is being governed as an autonomous nation. The political issues between China and Tibet have been infiltrating other areas including beauty pageants; it was on this account alone that in 2005, Tashi Yangchen also left the contest when faced with a similar situation.

China has not yet made any official comments about the incident.

Miss Tibet is an annual beauty pageant held in Dharamsala, Himachal Pradesh since October 2002. It is produced by Lobsang Wangyal Productions.