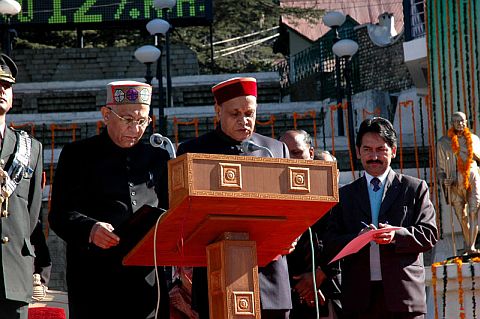 PALAMPUR: Families of over sixty martyrs have high hopes from the Chief Minister Prem Kumar Dhumal as most of the projects named in memory of soldiers killed in Kargil war in the year 1999, by BJP government have been left half way by the congress government for wants of funds and other official bottlenecks. In past five years no efforts were made to complete these projects. During assembly elections this was also one of the issue responsible for the debacle of congress in Knagra and Hamirpur districts.

Despite repeated requests to the state government by various organizations and families of martyrs, there was none to listen their grievances and take care of these projects launched in the memory of martyrs. Even the assurances given by the former Chief Minister Vir Bhadara Singh during congress regime to the families of these martyrs could not be implemented and remained confined to files.

The parents of martyr Yoginder Singh who had sacrificed his life while fighting Pakistani intruders in Kargil on July 25,1999, are deeply shocked over the attitude of state government in not completing a road named in the memory of their son. Talking to The myHimachal news the parents of martyr said that even after expiry of eight years only one-kilometer portion of the road was completed, that is yet to be black carpeted.

Mr. Kuldip Kumar father of the martyr said that the Chief Minister Prem Kumar Dhumal had visited their house immediately after the sacrifice of his son and announced that Amb-Pathiar Road leading to their village would be named as â€œ Saheed Yoginder Singh. Mr. Dhumal has also assured them that the road would be completed in six months. He said three-kilometer road leading to the village had been left half completed by the HPPWD for the reason best known to the state government.

Mr. Amar Singh a Vice President of local panchyat said that despite their repeated request to the Executive Engineer, PWD Dehra Gopipur, no steps were initiated for the completion of this road. Another soldier of the village Commandant Lal Chand regretted that government had no value for the supreme sacrifices made by the youths of Kanagra while fighting with the militancy in Jammu- Kashmir and other parts of the India. He said it was shame on the part of government for not completing this road, which was named in the memory of martyr by the state government.

Yet in another case the construction of Sorabh Van Vihar named in the memory of Captain Sorabh Kalia, who was the first to made sacrifice in the Kargil war from Himachal Pradesh is in state of neglect.

A senior officer of the forest department while talking to myHimachal news admitted that that in past five years no funds were sanctioned by the congress government for this project therefore, department left the execution work in half way.

Mr. Shanta Kumar, former Chief Minister said rupees fifty lakh given by the ministry of tourism, government of India for Sorabh Van Vihar, in the year 2003 was surrendered by the state government merely on political consideration. He said he had got released these funds.

The parents of Captain Sorabh Kalia are also deeply hurt over the attitude of the state government in not completing the project. They said a statue of their son had already been installed in the project area, but today the road leading to Van Vihar is in state of neglect. It is very difficult for any one to reach to the site. They said such projects should be kept away from the dirty politics.

Now the families of martyrs have high hopes from the Chief Minister Prem Kumar Dhumal as he had already assured them that the project named in memories of martyrs in the state would complete on top priority.

Meanwhile Mr Prem Kumar Dhumal Chief Minister, when contacted by The myHimachal news said that necessary directions would be issued to all the concerned departments to complete these project on priority under time bound plan. He said there would be no shortage of funds for such projects.