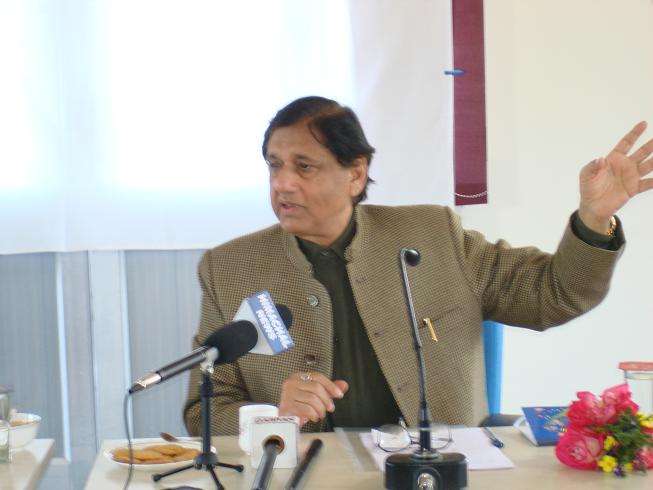 PALAMPUR: Mr. Bhisham K Agnihotri, a renowned jurist, Chancellor Emeritus and former Ambassador has expressed grave concern over the rampant corruption in the public life in India. He said it was serious matter and country needed strong action on this issue as in present system as it has become quite difficult to move further without greasing the palm of the concerned officials.

Mr. Agnihorti who is a NRI and settled in the USA was addressing a news conference here this afternoon. He said the NRIs all over the world are deeply worried over the day to deterioration law and order problem, lack of good governance and administrative failures in India which had resulted in problems like unrest among the youth, unemployment and corruption. He said a persons who comes from abroad finds it very difficult to use to the Indian system as the situation in US and UK is entirely different. Situation was quite alarming in India as the number of this country had gone up in the list of corrupt countries in past few years.

Mr. Agnihotri said if serious efforts are made all these problems could b easily checked and solved but nothing could be done without the cooperation of public and our leaders who run this nation. He said who so ever government had ruled this nation had faced these problems but none was serious to bail out country from these problems.

Mr. Agnihotril who is also a leading lawyer in USA said that piling up of cases in the Indian courts was another matter of concern. He said Indian government should come out with a legislation for the speedy disposal of the cases in lower as well as in higher courts so that justice was not delayed. He said Indian government should follow the US pattern where the disposal of all cases in lower and upper courts were under a time bound plan and no one could create hurdles in the speedy disposal of all cases. Lawyer pleading the cases and agencies investigating the cases in India should also cooperate the courts in this matter. The delay is always occurred at evidence stage and these two organs of the Indian judicial system could work together for improvement.