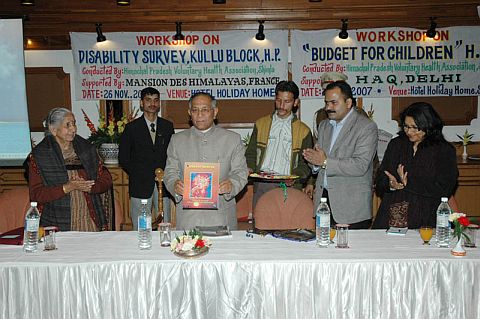 The event was held at Hotel Holiday Home, Shimla – presentations on ‘Budget for Children’ and ‘Disability Survey Report’ were shown and discussed here.

Mr. Kokje said that a State wide survey should be conducted regarding child welfare in Himachal Pradesh including expenditure on children to give them best food and education. He further stressed upon the need to identify the needy children in order to spend budget where needed and there should be a social audit for these welfare activities. He also said that a comprehensive survey should be conducted for special children in the State so that they could be accommodated in various schools for their education.

The workshop was organized by HPVHA and Haq. Governor honoured Shri Shriniwas Joshi, Dr. R.N. Mahanta and Prof. N.S. Bisht for their contribution in publication of these reports and publications.