Shimla: Cold conditions have impacted the polling turnout in the three high altitude assembly segments which went to the polls today as preliminary reports tabulated the turnout at just over 60 percent even though data from remote polling booths was being collected till late evening.Polling to these seats have normally been taking place in the summer and the turnouts recorded in the 2003 assembly election was as high as 77 percent. Breaking precedence, to correct a poll anomaly under which the government that came to power in a Feburary poll having a direct bearing on a late poll in these segments, prompted the election commission to hold a winter poll, this time around.

Manisha Nanda, Chief Electoral Officer said here today that approximately average polling was recorded in the first phase in three tribal assembly constituencies i.e. 1-Kinnaur (ST), 54-Bharmour (ST) and 55-Lahaul and Spiti. She said that the poll for the election concluded peacefully and no untoward incident has been reported so far from any part of these constituencies.

Chief Electoral Officer congratulated the polling personnel and thanked the voters of these areas for their contribution to conduct peaceful and fair elections in these areas. Today, weather was also in the favour of electors and candidates, she added.

She further said that twelve contesting candidates were in the fray for the elections and there were 1,27,785 voters in the three Assembly Constituency. She said that counting of votes will start on 28th December, 2007 under the supervision of Election Observers appointed by Election Commission of India.

She said that polled EVMs and other statutory election material of 55-Lahaul Spiti (ST) Assembly Constituency will be stored at GPS, Kullu, Lower Wing( Khori Ropa) District Kullu. Counting will take place in the same premises on 28th December, 2007, she added.

Chief Electoral Officer further said that polled EVMs and other statutory election material of Pangi area of 54-Bhamour (ST) Assembly Constituency will be stored at Room No. 20, of Mini Secretariat, Bharmour, District Chamba. Counting will take place in the same premises on 28th December, 2007, she added.

Nanda said that the polling started with slow pace in the early hours from 8.00 a.m. to 10.00 a.m. and it picked up gradually. According to the information reached at State Headquarters, 65 percent polling in Kinnaur, at Bharmour 60 percent and at Pangi 70-73 per cent while at Kaza 75-77 per cent polling was recorded.

About 100 polling stations in these alpine zones are located at over 8,500 feet with the highest polling station rising over the cloud levels at over 15,000 feet. 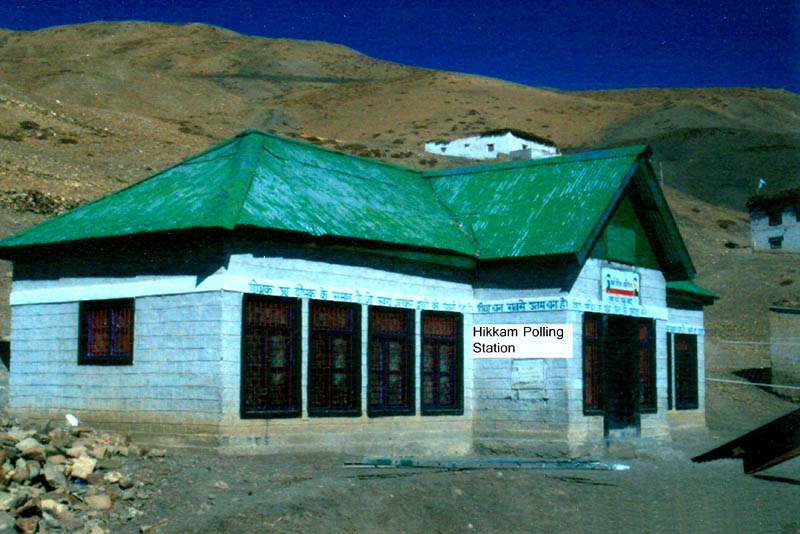 Hikkam in Spiti valley with its 318 voters is the highest polling station in India.

A dozen candidates are in the fray for the three seats. Though the main contest is between the BJP and the congress, but with the BSP having decided to contest all seats in the state is hoping to make a dent in the region.