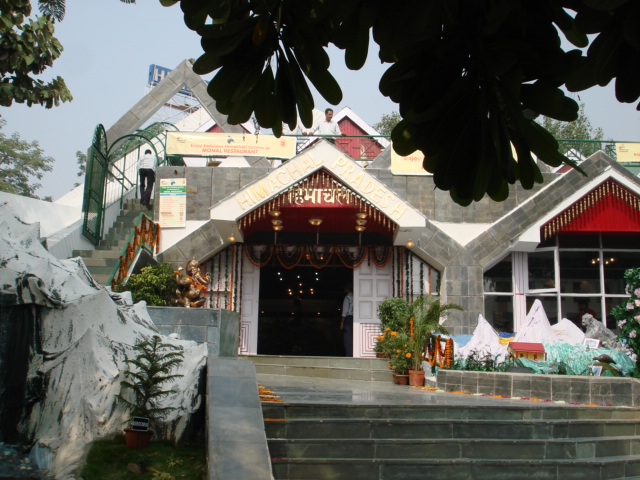 Mr. Kamal Nath, Union Minister of Commerce and Industry, said that the Governmentâ€™s growth-friendly policies relating to investment, taxation, external trade, banking and finance, Foreign Direct Investment, capital markets and small scale industries have all evolved towards making our industry and enterprises more efficient, globally competitive and as free from restrictions as possible. â€œAs we move on the trajectory of high rate of growth, we have to remain alive to the needs and concerns of our rural areas, agriculturists, artisans and youthâ€, he added.

The 14-day event (14-27 November 2007) is being organised by the India Trade Promotion Organisation.

Himachal being partner state is main focus of the event, however not a single top official was able to attend the ceremony. Earlier Chief Minister was supposed to attend it but due to model code of conduct in place due to assembly elections, he could not attend. On the other hand Chief Secretary, who traveled all the way to Washington DC in USA, to impress US based investors could not find time to attend IITF in New Delhi, where general public as well as all major Indian investors visit. This golden chance for which State is given major role is missed and no one from state government has any replies.

Himachal Pradesh is situated in the heart of the Western Himalaya, identified as â€œDev Bhumiâ€ and is believed to be the abode of God and Goddesses. The north-eastern part of the State is decorated with snow-covered, silver-headed mountains, halcyon lakes and green stretches. The state is rich in flora and fauna which is why tourism is a flourishing sector in the state.

Industrial development has been given big boost in the state. Pollution-free environment, abundant availability of power and rapidly developing infrastructure, peaceful atmosphere responsive and transparent administration are some of the advantages that the entrepreneurs get in Himachal Pradesh. Today, the state has about 33,618 Small Scale and 356 Medium & Large Scale units with an investment of about Rs. 5243.39 crore generating employment for about 2,00,560 persons.

Himachal Pradesh has made significant progress in the field of industrialisation in the past few years.

Agro-based industries: Himachal Pradesh is predominately an agricultural state. The natural endowments like soil, land, water etc. are being harnessed in such a way that the cherished goals of ecological sustainability, and economic upliftment of farming community are achieved. About 18-20 percent area is irrigated and rest is rain-fed. Huge investment potential exists in the fields of tea plantation, food processing, seed production, biotechnology, etc. The state has made significant progress in the development of Horticulture. The topographical variations and attitudinal differences coupled with fertile, deep and well-drained soils favour the cultivation of temperate to sub tropical fruits. The region is also suitable for cultivation of ancillary horticultural produce like flowers, mushroom, honey and hops.

Information Technology: The Government of Himachal Pradesh has developed an IT Vision-2010 in collaboration with NASSCOM to make Himachal Pradesh an IT destination. Under the IT policy, it has been decided to accord the status of Industry to all IT projects, including IT related services and educational institutions. As such, all the incentives available to Industry under the presently applicable Industrial Policy will also be made available to the IT units in the state.

Tourism: Tourism Industry in Himachal Pradesh has been given very high priority and the Government has devloped an appropriate infrastructure for its devlopment which includes provision of public utility services, roads, communication network, airports, transport facilities, water supply and civic amenities, etc. The State Government is poised to transform the state into â€œA Destination for All Seasons and All Reasonsâ€.

Units based directly on horticultural produce

Why invest in Himachal Pradesh:

(a) Simple Rules and Procedures:

(b) Clearances by the State Environment and Pollution Control Board:

1. Streamline procedures for the grant of No Objection Certificate (NOC) and easy clearance of setting up of project

1. Exporting units in the state at a level playing field in comparison to their competitors
2. Export Promotion Parks in the state.
3. Common facilities such as inland containers, bonded warehouses, raw material depots and provision of incentives and concessions for the supply of power, labour related issues and taxes.
4. Term loans from Himachal Pradesh Financial Corporation and Himachal Pradesh State Industrial Development Corporation.

Status of industrialisation in Himachal Pradesh:

During the last three years, the industrialization in the state has made significant progress. The share of industry and services sectors respectively has increased from 1.1 & 5.9 percent in 1950-51 to 15.9 and 17.3 percent respectively during 2004-05. The share of industry sector was 17.1 percent during 2005-06. The rich natural resources of the state are ideally suited for investment in three major sectors namely industries, hydro-electric power and tourism. The grant of Special Package of Incentives by the Central Government has acted as a catalyst in boosting industrial development in the state.