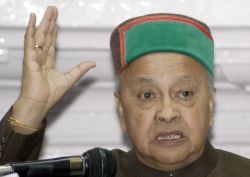 Shimla: With the BJP intending to make chief minister Virbhadra Singh as the prime target of the election campaign, the congress is preparing to raise issues of corruption during the previous BJP government to fend off the oppositionâ€™s â€˜personalized attackâ€™.

Talking to select media persons, Virbhadra Singh today said that the ruling party would shortly be revealing details from a â€˜computer hard discâ€™ that was recovered from former chief minister’s office in 2003.

Names of 3015 candidates allegedly found to have been recommended for selection in jobs in various recruitment agencies by the then chief minister office are said to be on the recovered data.

â€œOther than development done by our government, corruption of the previous BJP government is going to be our main election issue,â€ said Virbhadra. â€œWhat charges the the BJP is leveling against congress leaders has no basis. Our charges are backed by investigations carried out,â€ he said.

â€œI am not surprised that they are resorting to character assassination by leveling false and frivolous charges,â€ said Virbhadra.

He said the people of Himachal do no relish indecent slogans, which the BJP is coining up. The voters wants decent and clean electioneering and would reject the mud slinging being planned by the BJP.

Citing the case of former Sub-Ordinate Services Board chairman, S.M.Katwal, the chief minister said â€œhe has been convicted in three cases for irregularities in recruitments. Its not indictment of Katwal, but of Dhumal directly, said Virbhadra. After Katwal was nailed, Dhumal should have publicly apologized and quit public life,â€ he added.

He said a case has already been registered against the Solan BJP MLA, Rajeev Bindal for committing irregularities in jobs in Solan Municipal Council. “He was arrested in this case and a challan is being put up in the court shortly’.

Besides that an investigation into allegations of benami property against a BJP MLA from Hamirpur district has completed and case is being registered into it, he said .

Some other cases have been also registered, including that against the former VC of Himachal Pradesh University during the previous Dhumal regime, highlighting corruption in the then government. The chief minister said a number of other cases were in progress pertaining to Dhumal regime and the Congress government was in no hurry to target anyone without irrefutable evidence.

Regarding BJP’s leaders claim that former Punjab chief minister Amarinder Singh and senior congressman Moti Lal Vohra having filed affidavits in the court in response to a defamation suit filed by Dhumal that they had not leveled any allegations against the BJP leader, Virbhadra responded by saying â€œIt is a personal matter. Congress has nothing to do with it.â€