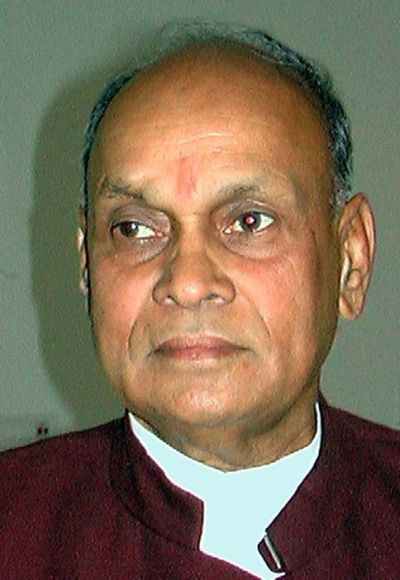 All guesswork ended today when BJP announced senior leader and ex-CM, Prem Kumar Dhumal, 63, as the candidate for the Chief Ministerâ€™s chair in Himachal Pradesh. The surprise decision was taken by partyâ€™s Parliamentary Board in presence of both Dhumal, who is the partyâ€™s sitting MP from Hamirpur, and veteran leader Shanta Kumar who was also in the race for the top post.

Dhumal was the CM of the state from March 1998 to March 2003. Then, he served as the Leader of Opposition before winning parliamentary by-poll elections by defeating Congress candidate Ram Lal Thakur by over 80,000 votes in 2007. However, it was not the first time he served as a parliamentarian as he was a member of the August House in 1989 and 1991.

While talking to press, Dhumal was very confident that BJP will come into power with comfortable majority of votes and added that he will work with full cooperation and guidance from Kumar.

However, the party has started working hard and will release its election manifesto in this week. BJPâ€™s five top leaders will visit the state formally to kick off poll campaign; partyâ€™s President Rajnath Singh will address a poll meeting at Solan, L K Advani will address a rally in Kullu district, Sushma Swaraj in Dharamsala, Murli Manohar Joshi in Chopal while Venkaiah Naidu will address a poll rally in Hamirpur for the second stage of assembly elections on 5th, December.

This decision of the top post by BJP might disappoint the people of Kangra and Shantaâ€™s supporters.