Presiding over the concluding function of the third training program organized for the 38 beneficiaries, Dr. Kumar as chief guest said that there was immense potential of improving income and employment in the rural areas of Hills through increased milk production besides meeting the demand of the fluid milk in this tourist state.

He informed that the three training programmes were sponsored by the District Rural Development Authority (DRDA) Shimla in which 68 farmers and 39 farm women were imparted training by the experts of Krishi Vigyan Kendra.

Dr. Kumar said â€œthe trainees were imparted training in animal feeding, breeding, health care, management and making of dairy products besides being shown the elite herd of cattle being maintained at the instituteâ€™s cattle yard and by the dairy farmers in the villages that would help them in making their dairy farms scientifically.â€ 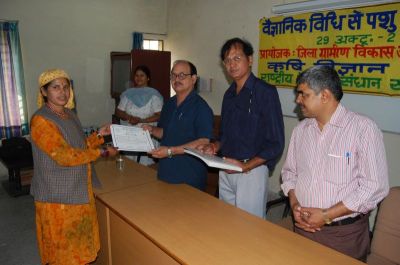 Dr. Dalip K Gosain, Head of the Krishi Vigyan Kendra said â€œkeeping in view the feeding constraints in this hilly district the team of dairy scientists and technical officers during the programmes laid special emphasis on imparting training on improving the nutritive value of straws, dry grasses, forages, making hay, silage and economical rations for feeding to cattle that would enhance milk production.â€

While interacting with the trainees from Rampur , Rohru, Jubbal Kotkhai and Chopal blocks of Shimla who attended the training programmes Dr. Gosain found that the beneficiaries were mainly engaged in rearing cattle having poor milk production.

Interestingly, he found that Mr. Satpal of Village Thandi of Rampur Block was selling around 52 litres milk procured from ten members of his self help group and was earning a profit of Rs. 120 each day. He further found that in addition Mr. Satpal was also engaged in selling vermi-compost varying from Rs.3-5 per Kg and urine of cattle at Rs. 3 per litre at Kinnaur in Himachal Pradesh that was being purchased by the apple orchard owners. Mr. Satpal claimed that he could earn a profit of Rs. 39,000 per year by selling milk, vermin-compost and urine obtained form one cow.