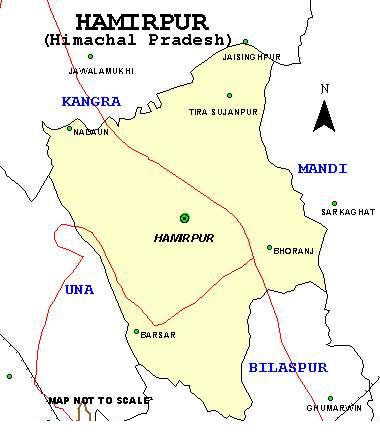 Top leaderships of BJP and Congress both are flooded with the claims of tickets from Hamirpur district, which is considered as the main political battle field for both parties. Hamirpur is the home district of Prem Kumar Dhumal, the senior BJP leader and former Hiamchal chief minister.

Dhumal belongs to Bamsan area of the district and had represented Bamsan assembly segment in the state assembly before being elected to Lok sabha in a bye election.

There are five assembly segments in the district and three of them are with BJP and rest of two with the Congress. In 1998 elections, the BJP has won all the five but lost two (Hamirpur and Nadaun) in the 2003 assembly elections to the Congress nominees Anita Verma and Sukhvinder Singh Sukhoo respectively.

However, in the bye election to Hamirpur Lok sabha seat held on June 2nd, 2007, the party was able to manage lead on all the five seats from the district due to Dhumal’s personal wave.

The BJP is trying to make a clean sweep of all the five seats from the district with an aim to form its government in the state and to install Prof. Prem Kumar Dhumal, MP as the next chief minister in case of party coming to power. The writ of Dhumal will once again run in the district as for as the allotment of tickets is concerned, feels the political pandits.

The party is clear of re-nominating Prof. Dhumal or any of his nominees from Bamsan from where Dhumal had won last time. The party is going to re-nominate Ishwar Dass Dhiman, former minister and district bjp chief, Baldev Sharma from Mewa (reserve) and Nadaunta seats.

However, the situation is unclear from Hamirpur and Nadaun. There are three main aspirants from Hamirpur seat. They are former MLA, Urmila Thakur, Rajendra Rana, the HP spokesman of the party and Vinod Thakur, the general secretary of district bjp. All are adamant for getting party ticket and are doing hectic lobbying to manage the party bosses in their favor.

From Nadaun, the former MLA, Babu Ram Mandyal is trying his best to seek the party nomination for third time. He is strongly opposed by the party cadre as they dub him as a turn coat. They are strongly opposing his candidature. These persons had opposed Mandayal during 2003 elections as a result the seat had gone to Congress nominee, Sukhvinder Singh Sukhoo.

There is general feeling among the bjp leaders and workers that if suitable persons are not given tickets from Hamirpur and Nadaun, the party will face piquant situation and may also lose both the seats to the Congress this time too.

Meanwhile, the Congress is also faced with catch-22 situation for the grant of the party ticket from the district. The party is going to re-allot tickets to Anita Verma and Sukhvinder Singh Sukhoo from Nadaun and Hamirpur seats respectively. However, a group in the party is strongly opposed to give tickets to both for not helping the grass root party workers during their rule.

The party is faced with tough situation from Mewa (Reserve) from where two former rivals Prem Kaushal and Suresh Kumar are vying for the ticket. While Suresh Kumar belongs to the camp of Mrs. Vidya Stokes, the HP Power Minister, Kaushal is the close friend of the Chief Minister, Vir Bhadra Singh. Due to constant infighting in the cadre, the party is losing this seat to the BJP for the last twenty years.

Similarly, the party is facing piquant situation from Nadaunta assembly segment from where former MLA, Manjit Singh, a loyalist of chief minister is getting tough opposition from Rajendra Zar, the Vice President of the state unit of party. Both are old rivals and don’t see an eye to eye with each other thereby giving benefit to the BJP in all the elections.

From Bamsan seat, old war horse Kuldip Singh Pathania, the general secretary of Himachal Congress is all set to face Prof. Dhumal in the election this time too. Pathania had lost twice to Dhumal with wide margins.