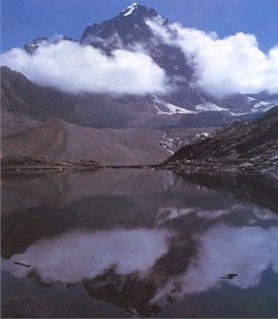 Those not hardy enough to trek it to tranquil lake at the feet of the 5656 meter high Manimahesh Kailash peak, would be able to avail the chopper service. “We have given a no objection certificate for landing at the Gauri Kund helipad, which is just a kilometer short of the pilgrimage spot” said Pushpendra Rajput, deputy commissioner of Chamba.

“The helicopter route has obtained clearance from the Director General of Civil Aviation, at Delhi,” he said.

Rajput informed that last year about 4 lakh pilgrims had trekked it to Manimahesh. “Since then we have set up the Manimahesh Trust for overlooking all the arrangements of the yatra and more pilgrims that last year were expected this time,” he said. A helicopter flight, costing Rs 8000, would enable the pilgrim to part take in the customary bath at the holy lake on the same day which otherwise involved about a weeks trek.

Held sacred to Lord Shiva, the Manimahesh lake is at a 4080 meter altitude in the Budhil valley of Manimahesh ranges. The peak is regarded as one of the mythical abodes of Shiva.

Pilgrims have already started undertaking the yatra but and enough preparations have been made to oversee any exigencies, said Rajput. The whole route has been covered with wireless communications, medical camps complete with oxygen cylinders and staff is in place and arrangements for food and shelter have been made, he said. The ‘chari’ yatra will start on 13th September and culminate a week later, he informed. Trained mountaineers are being deployed all along the route to tackle any emergency situation. Road traffic beyond Bharmaur is regulated, said Rajput.