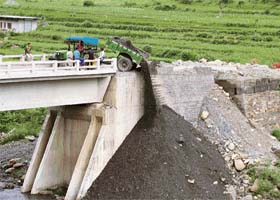 It seems that Himachal Pradesh government has not learnt any lesson even after the reports from all over the state poured in about the heavy damage to the environment due to haphazard, un planned and unscientific work on the sites of several mini hydle power projects in the state. Residents have made a number of complaints to the officers regarding unrepairable loss caused to the environment and heavy damage to the green cover by these projects.

Villagers in a letter shot to the Deputy Commissioner of Sirmour district has said that despite their repeated requests the company officials or local administrative officers had not stopped this illegal work. They fear that if the company did not stop dumping of debris in the Pallar River, immediately, it would pose serious threat to the agricultural land of the village, water mills working on the bank of river and a number of houses close to the river bed. They apprehended that flesh flood in the river may play havoc in the area due to obstruction and diversion in the natural flow of the river.

People had questioned the silence of officers and leaders of the area on this issue even after a number of telephonic and verbal complaints lodged by them. They had alleged that heavy machinery of the company which runs on heavy chain crosses the newly constructed Pallar bridge freely, several times in a day due to which surface of the bridge had been badly damaged. Threat to the bridge could not be ruled out due to heavy vibration in the bridge on running unusually heavy machinery on the bridge, villages added.

Due to heavy dumping of debris around the bridge pillars flash floods may cause heavy damage to the bridge which connects 14 Panchyats of Pallar Par area with the district head quarter. The bridge had been constructed after an struggle of 30 years put up by the residents of the area for construction of the bridge on the Pallar River and people would not tolerate any damage to their â€˜life lineâ€™, adds Suresh Kumar, a leading social worker of the area.

In the complaint villagers had said that there was possibility of raising the silt level in the Jatoun barrage and may cause heavy damage to the Giri power house as debris was ultimately flowing to the Jataun Barrage which is near Dadahu. More than 24 persons who have put their signature on this representation have claimed that local Panchyat was getting rupees 5000 per month from the company â€˜as a cost to be silentâ€™.

When this matter was brought in the notice of Mr. Shanta Kumar, former Union Minister and all India Vice President of BJP by this correspondent at Nahan, he expressed deep concern on the â€˜havocâ€™ played by the mini hydle power plants with the environment in the different parts of state. He said that it was an example of total failure of government machinery in implementing the law to protect the environment and ecology of the state. He said that tens of thousand of valuable green trees have been felled by these companies and a number of rivers polluted in the name of construction of mini power projects. He added that coming generations would have to pay heavy cost of the havoc being meted with the environment, agitation of people against were there right. He said that he was very much in favour of constructing the mini hydle plants in the state but ecology of the state would have to be saved. He added that it was mandatory on state government to save forests, water sources and Rivers of the state at any cost.