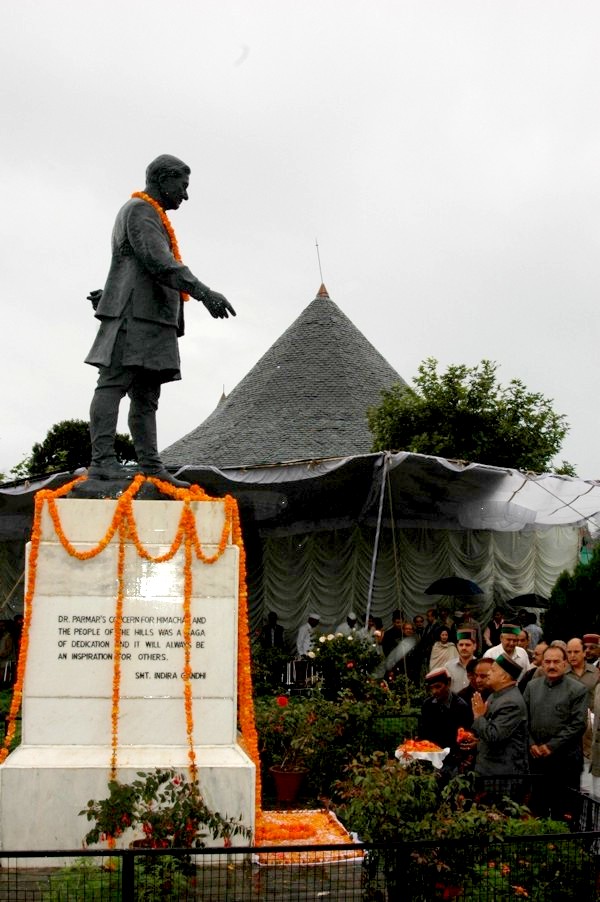 Grateful people of Himachal Pradesh remembered the architect and the founder Chief Minister, late Dr. Yashwant Singh Parmar on his 101st birthday by offering floral tributes at his statue led by Virbhadra Singh, Chief Minister at The Ridge here today. He was followed by his Cabinet Colleagues, Members of the State Legislative Assembly, Former Members, Freedom Fighters, Mayor and Councilors of Municipal Corporation, Shimla, Senior Officers and people from all walks of life.
Addressing the assembly of the august gathering in the Himachal Pradesh Vidhan Sabha Complex, Chief Minister said that late Dr. Y.S.Parmar, was a visionary, far sighted and dynamic leader who dedicated his entire life for making Himachal Pradesh, a most progressive and developed State. He said that the people of the State would remain indebted to him for generations to come for the hard efforts he made to get the State, identity as a separate political unit, merger of the hilly areas of Punjab into Himachal and attaining of Statehood. He said that Dr. Parmar used all the channels at his command to raise the issues of State concern, fought tooth and nail and ultimately achieved success on all fronts.

Chief Minister said that Dr. Parmar was a multifaceted personality who struggled all his life for the rights of the people and the present status had been achieved by following the path shown by him. He said that his Government was committed to carry forward the ideology of Dr. Parmar and implement the same keeping in view the present day requirements. He said that real tribute to Dr. Parmar would be working in close coordination for the betterment of the State and weaker sections of the society which had always been the focal point of the Congress Governments.

Gangu Ram Musafir, Speaker, HP Vidhan Sabha welcomed the Chief Minister and said that Dr. Parmar was a â€˜Yug Purushâ€™ who started the developmental journey of the State with meager resources at his command. He said that Dr. Parmar had been instrumental in making Himachal Pradesh a separate political unit by effectively raising the concern at the highest level at the Centre. He said that the land reforms implemented by Dr. Parmar had provided ownership rights to the tillers of the land as equitable distribution of the land was carried out. He said that the HP Vidhan Sabha had made maiden attempt to bring out a compilation of all the members of the Legislative Assembly as a mark of respect to the founder Chief Minister of the State, Dr. Y.S.Parmar.