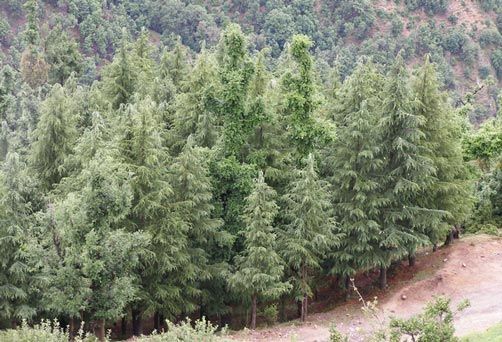 Environmentalists and forest department officers were greatly relieved after interim High Court order came in last year to stay grant of trees as traditional right of Timber Distribution [T.D.] in the Himachal Pradesh. As per statistics T.D. grant grabs around one lac cubic meter timber, which counts to nearly fifty thousand full grown Sal, pine and other valuable species every year. As per experts on an average one tree given under TD allotment consists two cubic meter of timber.

Interestingly, Chief Minister of Himachal Pradesh Mr. Vir Bhadra Singh has taken a clear stand on this issue by announcing to favour TD right holders, although the issue is pending in the state high court. During his recent visit to Sirmour on the occasion of presiding over of state level Van Mahotsava CM announced at a public meeting at Nohra Dhar that government would make all efforts to protect TD rights of the people including to make efforts to get favorable decision in the case under consideration in the state High Court. Environmentalists feels that the on going fight to save green forests have become more difficult as no political party in the state has welcomed a ban on the grant of TD. Politicians were not ready to even discuss this issue as they feels that any words uttered by them on this issue would sent negative signals among the residents, who were their voters also, â€˜as the issue was politically very sensitive,â€™ utter one of the leading politician of the district.

In Himachal Pradesh out of its total 55673 square kilometer geographical area 37,033 sq. K.M. area has been legally put under forest cover which includes 1000 sq. K.M. area covered by Nullahas and natural streams. This area also includes 19020 sq. K.M. area which was having hard rock or due to numerous other reasons area was not suitable to grow forest crop. As per the statistics published by the forest department, only 17013 sq K.M. area in the state was actually covered by the forests which consists 30.5 percent of total geographical area of the state.

Highly placed sources in the department admits that on the one hand the total emphasis of the government was on the increase of forest cover of the state and on the other hand green felling traditions like TD exists which was causing huge damage to the forest wealth. On the condition of unanimity they said that after 80â€™s on the several occasions it was discussed at higher level to give timber to the TD right holders on the subsidized rates from the depots of forest department but such proposals were every time turned down by the political leadership as no body wants to give any â€˜negative signalâ€™ to the voters by â€˜hamperingâ€™ their right on TD felling.

Experts says that infect TD law was erected at the time when people used to live in huts and needed timber for reconstruction or repair of their huts but in present time when people lives in Pucca houses in every part of the state does not require TD timber more than one time in their life time, which at present was available after every five years. Experts says that there was hardy any full grown healthy tree left in the forests where TD rights exists, one Sal or Pine tree take more than 100 years grow fully.

A retired forest officer Mr. T. R. Chauhan commented that every body knows that most of the green trees felled by TD right holders were being misused. He favoured that except forest officials no body be allowed to enter the forests. Government must distribute timber for TD right holders on subsidized prices from forest depots. Mr. Chauhan favoured felling of over mature and dry trees by the forest department only.

In Sirmour alone as per statistics available, around two thousand full grown green trees were fell every year for TD purposes and nearly half of them in Paonta forest division where TD always had been an election plank and flourishing business, Renuka forest division is on number two in this line where Pine forests exists. â€˜When ever forest officials tried to impose a ban on the frequent grant of TD, political leaders of the area intervened and officers had to face the wreath of TD politicsâ€™, says Manohar Singh an environment activist.