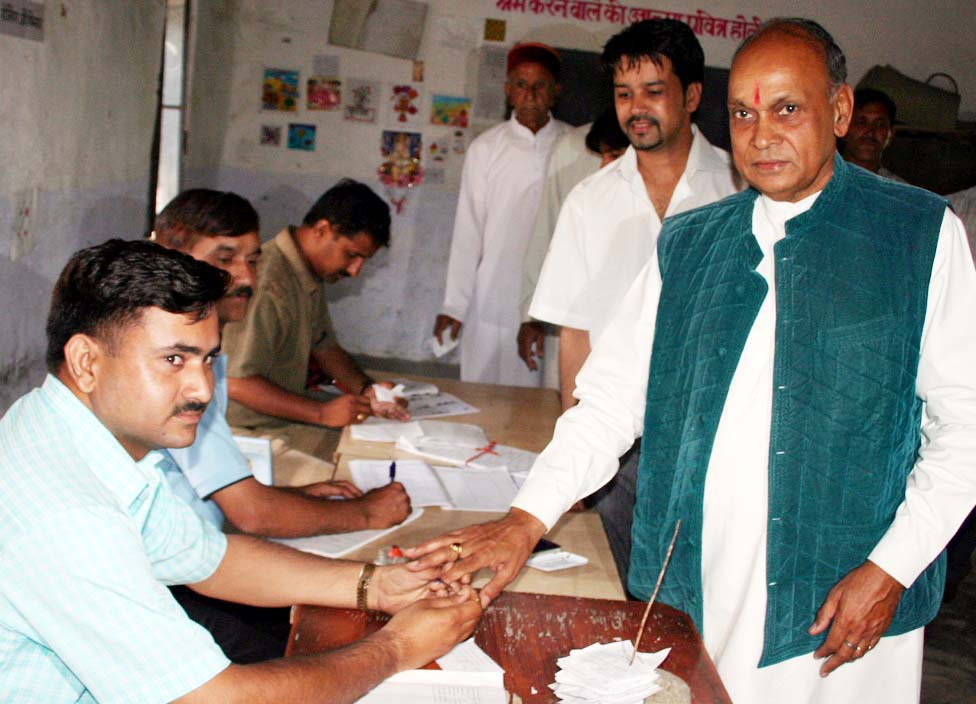 A polling officer applies ink on the finger of BJP leader, Prem Kumar Dhumal during polling for bye election to Hamirpur Lok Sabha seat at Samirpur polling station of Hamirpur district on Saturday. Anurag Thakur, son of Dhumal looks on

Hamirpur (HP), June 2: Senior BJP leader, Prem Kumar Dhumal was amongst those first who cast their votes at the Samirpur Polling station of the Hamirpur district this morning in connection with the bye poll for the Hamirpur Lok sabha seat. Polling for bye election to Hamirpur Lok sabha seat started on a brisk note in all parts of the Parliamentary constituency this morning. There was heavy rush of voters at the polling stations and women were outnumbering men there. People were standing in long queues to wait for their

turn to cast their votes.

Earlier, Dhumal family offered Puja in the temple of Maa Awahedvi, the Kul Devi of the family.

Though there are six candidates in the fray, the main contest is between Prem Kumar Dhumal of BJP and Ram Lal Thakur of Congress.

In all, 11, 75,238 voters will exercise their right of franchise in todayâ€™s polling on 1,372 polling booths spread across the districts of Hamirpur, Una, Bilaspur and Dehra revenue sub division of kangra.

Tightest security measures have been taken for maintaining the law and order and over 3000 policemen and home guards have been deployed at 1372 polling stations, including 163 hyper-sensitive and 293 sensitive ones.