Hamirpur: Counting for bye election to Hamirpur Lok sabha seat in Himachal Pradesh will be held on June 5 at Hamirpur, Dehra, Una and Bilaspur. The counting will start at 8.00 A.M and the results are expected by afternoon the same day.

Though there are six candidates in the fray, the main contest is between Prem Kumar Dhumal of BJP and Ram Lal Thakur of Congress.

Kumar who is also the Returning officer for the Hamirpur seat said today that all EVMs have been kept under tight security. These EVM’s had been kept at Hamirpur, Una, Bilaspur and Dehra.

He said that counting for all five Assembly Constituencies of Hamirpur District would be held at Government Senior Secondary School, Boys, Hamirpur where four centers have been set up. 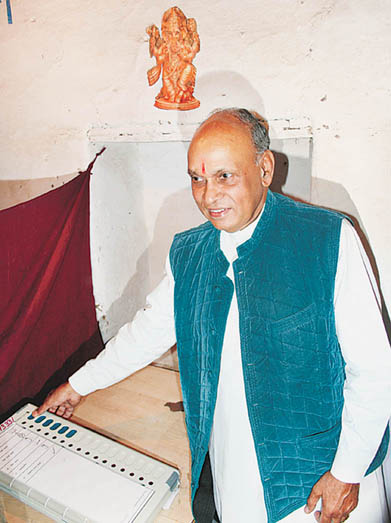 Meanwhile, leaders of Congress and the BJP both are highly optimistic about the win of their respective candidates. The BJP leaders and workers feel that the victory of their candidate, Prem Kumar Dhumal is certain as the massive polling this time will go in their favor. Dhumal told this reporter he was highly optimistic of his victory in the election as people voted enmasse for the BJP this time.

On other hand, the Congress workers and leaders too are optimistic about their victory. They say that the high voting percentage this time will help them this time to win the election.

However, the political analysts of the state say that the massive turn out of women this time is likely to upset the calculation of the parties as women used to play decisive role in any election.

The silence on part of the women this time may help the opposition as they were highly upset with the rising prices, growing un-employment and failure of the government to help them to solve their multifarious problems.