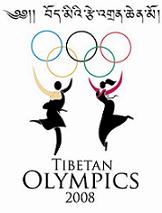 MCLEOD GANJ, Dharamshala, Himachal Pradeshâ€” Tibetan Olympics 2008 will be a sporting event for Tibetans to showcase their love and enthusiasm for sports, which draws all peoples together, fostering international friendship, goodwill and understanding.

According to a press release, Lobsang Wangyal, Director of the Tibetan Olympics said, we have created this event to ensure that Tibetans can be included in the spirit of the year during the time of the biggest global sporting event next year in Beijing.

Tibetan Olympics 2008 will be held from 15 to 25 May 2008 in Dharamshala, Himachal Pradesh. There will be two championships, Male and Female. Each category will have 15 participants from the ages 15 to 30 and 15 to 25 respectively. All the participants will compete in 10 different sports including long distance running, swimming, shooting, archery, track and field events.

The torch of the Tibetan Olympics will be carried from Gandhi Samadhi in Delhi to Mcleod Ganj, Dharamshala. It will be lit on 30 January (Gandhi’s death anniversary) 2008 and will be carried by a series of Tibetan, Indian, and international runners. Each runner will cover 25 kilometres (covering over 600 kms altogether), before passing on the torch.