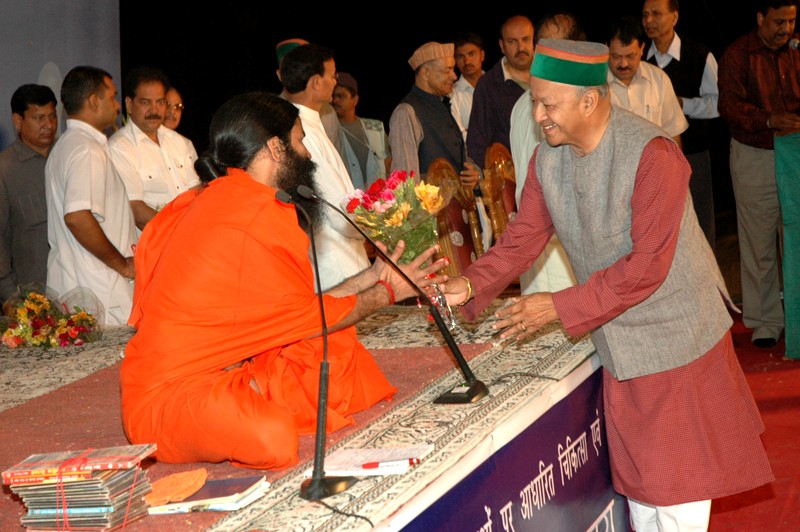 Virbhadra Singh, Chief Minister, said that Swami Ram Dev Jee has been instrumental in revival of ancient Yoga system and made people aware of the benefits from regular yogic exercises. He was addressing a mammoth gathering of devotees of Swamijee in the concluding function of the week long Yog Vigyan Shivir at Jathiadevi, near Shimla, organized by the Patanjali Yog Vidya Vishwavidyalaya, Haridwar in association with local organizers today.

Chief Minister said that India is a land of saints and sages who besides meditation practiced yoga to remain mentally and physically fit and also to protect oneself from various ailments. He said that prior to the stepping in of Swami Ram Devjee, the yogic exercises were confined to a limited section of the society and commonman was not aware of its benefits. He said that the endeavour of Swamijee in reviving the ancient system of yoga and making it the household affair, deserve appreciation since it had encouraged people to practice yogic exercises to remain physically and mentally strong and healthy besides crossing the national boundaries and attracting the attention of the foreigners towards its unparallel benefits. He said that the contribution of Swamijee would be remembered by the people the world over for ages to come.

Virbhadra Singh said that Yog Vigyan Shivirs organized under the aegis of the Patanjali Yog Kendras were also instrumental in strengthening the bond of universal brotherhood, communal, religious and social harmony. He said that Himachal Pradesh was a most peaceful State, land of divine powers where saints and sages have been praying since the time immemorial. He said that there was no better place than Himachal Pradesh for holding the Shivir in the clean and serene environment. He urged the Swamijee to make Yog Vigyan Shivir an annual feature, especially in summer so that besides the devotees of the State people from outside could also avail of the benefits of environment. He thanked Swamijee for his visit to the State and bless the devotees with his sermons and yogic exercises.

Swami Ram Devjee said that he was delighted to be in the State and for holding the camp here. He said that he aimed at making yoga a household affair and make the nation strong mentally and physically so that the world could know the strength of the yoga invented by the saints and sages of the ancient times. He said that he had been treating people within and outside the country with yogic exercises and as more people were getting benefited many more were adopting the system for curing their old and chronic ailments. He assured the devotees of organizing such camps in the State in future as well besides making trained physicians of the Yog Peeth available to the people of the State in the near future.

Suresh Goel of TMT Steel, Sponsorer of the camp welcomed the Chief Minister and Swamijee and said that the week long camp had attracted a large number of devotes from all over the country who reaped benefits of the yogic exercises guided by
Swami jee.