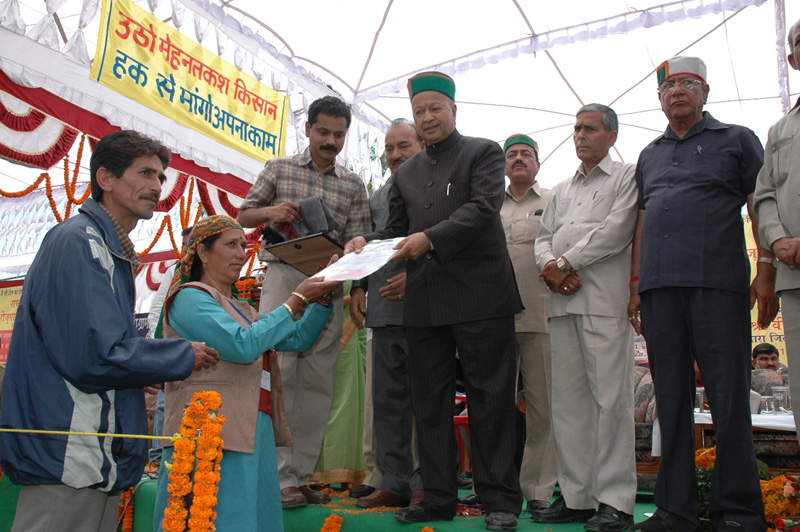 Chief Minister H.P. giving away the the district award for Total Sanitation Programme for their excellent performance to the Panchayat Dheem Katarau of Seraj Block of district Mandi today.

Himachal Chief Minister awarded four gram panchayats under Total Sanitation Programme for their excellent performance and included Dheem Katarau of Seraj Block with district award of Rs. 3 lakh, Kiling of Gohar Block, Rajwari of Balh block and Sandhol of Dharampur Block with block level awards carrying cash prize of Rs. 1.00 lakh each, after he laid the foundation-stone of newly opened Government Degree College Complex at Narla-Kunnu to be constructed at a cost of Rs. 5 crore and Primary Health Centre at Padhar to be constructed at a cost of Rs. 1.78 crore also handed over the revenue papers to the landless people of Sundernagar Division, granting them one biswa of land to start their self-employment avocation in the semi-urban areas.

Virbhadra Singh said that the Total Sanitation Programme had been launched in the State with a view to relieve the rural areas, Gram Panchayats of the open affication and maintain the hygienic conditions in the villages. He said that of the 473 gram panchayats of district Mandi 85 were taken in the first phase out of which 52 had been declared successful in launching the programme. He said that work was in progress in the remaining gram panchayats all over the State to make them clean and successful in implementation of the Total Sanitation Programme.