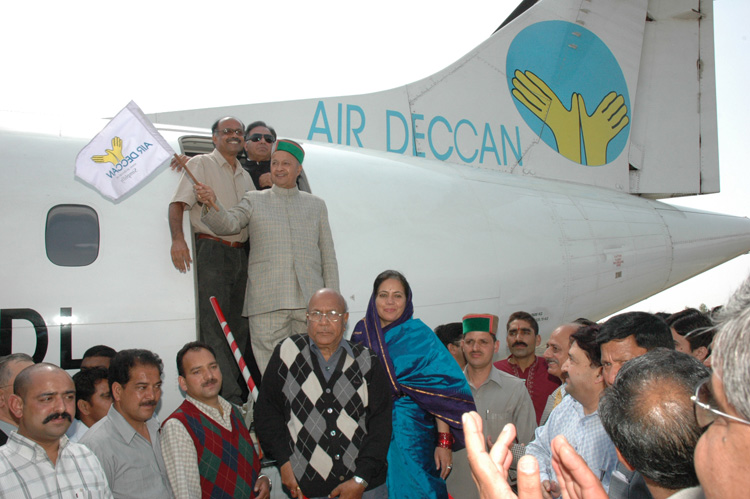 Himachal Chief Minister inaugurated the first ATR-42, Deccan Airways Flight to Jubbarhatti, Shimla Airport today. Shimla would be the 4th Airport after Kangra, Kullu and Civil Enclave, Pathankot, to facilitate the landing of ATR-42 flights in the State.

Addressing the inaugural ceremony, Virbhadra Singh said that State Government was signing an agreement with the World Bank to obtain Rs. 2500 crore financial assistance for widening and modernizing the road network to facilitate the increasing vehicular traffic movement. He said that major portion of this amount would be grant and minor portion, loan share. He said that it would go a long way in constructing the Expressways expeditiously.

Chief Minister said that State Government had contributed over Rs. 46 crore for the construction of the airports at Shimla, Kullu, Kangra and Civil Enclave at Pathankot. He said that with the opening of all these airports for landing of bigger ATR-42 type aircrafts, high flying tourists were bound to benefit and added that the State Government had initiated the construction work of all the airports in the State at its own level and spent crores of rupees in consultation with the Aviation experts. He said that State Government, on completion of airports, handed over the same to the Airport Authority of India for operational activities and regulating the flights. He said that Kullu-Manali airport was being expanded and modernized.
He said that work on Balh Valley International Airport at Sundernagar was in progress and likely to yield encouraging outcome.