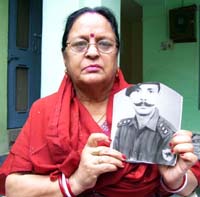 After a gap of 36 years, Neena Devi, sister of Major S.C. Guleri of the 9-Jat Regiment, who had been declared missing by the Indian Army in the wake of the Indo- Pak war in 1971, has got a ray of hope as she recently received a call from Pakistan through the Indian Army Headquarters to visit Pakistan and recognise her missing brother.According to family sources, his father, mother, one brother and wife Snehlata had died in the course of time.

Major Guleri hails from Dharamsala, and his sister Neena Sharma is married at Nurpur. She revealed that her brother was declared missing during the Pakistan war in 1971 from the Chhamb Sector in Jammu and Kashmir. But his family had got an unofficial information that he was languishing in Pakistan jail as he had been caught by the Pakistan army during the war. â€œThis information could not be confirmed by the Indian Army but due to improved relations between both countries this hope has been raised,â€ she asserted. She informed that she had submitted some information regarding her missing brother, sought by the Army Headquarters.

Major Guleri after finishing graduation from Government College in Dharamsala was recruited in the 9-Jat Regiment. He was married to Snehlata on October 22, 1971, but he was called by the regiment just four days after his marriage as Pakistan had attacked India and a war had been declared.

Microbiologist and a Toxicologist, Des was born in Nither, Kullu, Himachal Pradesh. At present Dr. Kashyap is working as a Research Faculty at Indiana University School of Medicine in Gary, Indiana, USA.