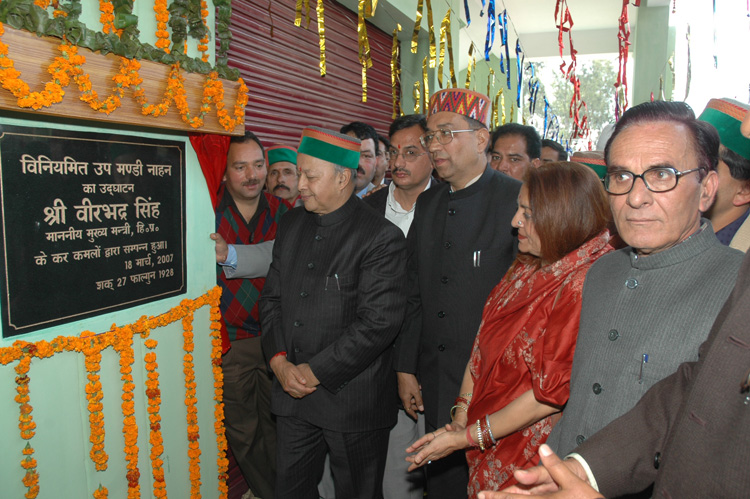 The State Government was carrying the socialization of the prominent religion shrines in the State and equip them with best of the basic amenities required to facilitate the devotees visiting them to offer their obeisance the year around. This was stated by Virbhadra Singh, Chief Minister while addressing an impressive public meeting at Trilokpur village in district Sirmaur after he offered his obeisance at the Bala Sundri Temple and dedicated beautification and development work in the temple complex, cafeteria building, parking and administrative block, Yatri Niwas, Conference-cum- Cultural Hall and Magistrate Duty Room and Watch tower completed at a cost of Rs. 4 crore to the devotees of the Temple today.

Chief Minister said that his Government had initiated the move to undertake socialization of the prominent religion temples on the anology of South Indian temples and ensure good governance besides creating best facilities to the devotees as well as infrastructural development of the temple with the donation and offerings of devotees.

Virbhadra Singh said that the State had taken about 20 temples under the scheme which had witnessed tremendous improvement after its socialization. He said that the State had created a corpus of Rs. 12.5 crore to cater to the devotional services in the temples which had surrendered its land holdings under the Land Reform Act implementation. He said that Himachal Pradesh was amongst the front running States which implemented the land reforms to remove the gap between land owners and tillers. He said that farmers which were tilling the land for generations were made the owner of the land which enhanced their social and economic status.

Chief Minister said that State had registered a developmental growth of 9.3 percent which was above the national average. He said that 25,000 new pensioners would increase the number of pensioners to 2,37,250 and Rs. 60 crore would be spent annually on this vital social welfare scheme. He said that all eligible would be getting the benefits and pending applications cleared.

Chief Minister said that with the religious teachings the Madaras needed to teach their students regular academic syllabus so that the minorities could also progress ahead at par with other progressive sections of the society. He said that secular education could help the children explore wider horizons the world over. He said that the children needed to be prepared for 21st century and acquainted with the emerging modern educational trends.

Chief Minister was accorded a rousing reception by the people of the area who erected welcome gates and accorded warm welcome. They also apprised Chief Minister of their local demands most of which were disposed off on the spot while sympathetic considerations assured on the others on priority.

CM also assured a deligation of congress people from Dadahu that Dadahu UP-Tehsil would be upgraded soon.