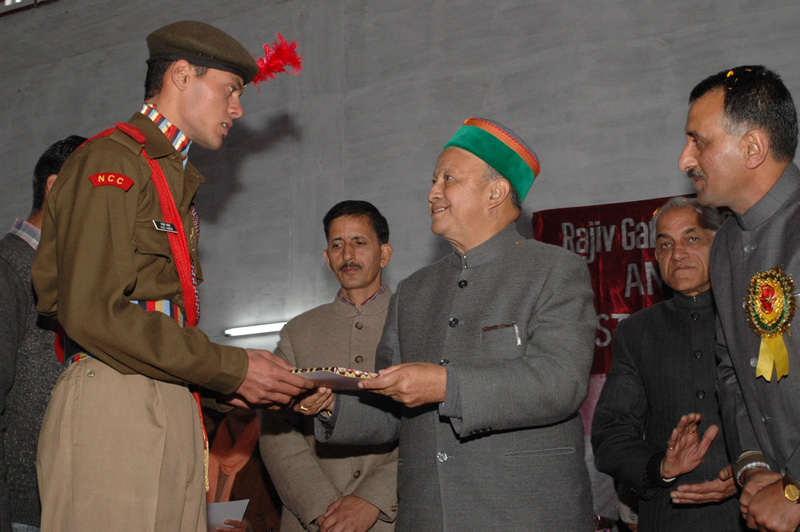 The State Government was considering opening of a top co-educational residential college of par excellence in Government sector to be opened in East Shimla to impart international standard education in the State. This was revealed by Shri Virbhadra Singh, Chief Minister, while delivering his presidential address at the Annual Prize Distribution Function of Rajiv Gandhi Government Degree College, Shimla, here today.

Chief Minister said that the State was speedily heading towards creation of educational infrastructure of par excellence by opening higher learning centres in the State where top quality educational facilities would be available to the students. He said that the State had already declared the Government Degree College, Sanjauli, as the Centre of Par Excellence Learning where admission was being made on merit basis on cut off marks basis. He said that the State Government was actively considering opening up of a top co-educational college of par excellence in Shimla East which would be self contained in all respects upholding highest educational traditions in the world. He said that effortâ€™s would be made to impart education of global standard and the teaching faculty would also be of highest merit in the country. He said that the admission procedure would be strictly limited to the capacity of the college purely on merit basis and was expected to match the top colleges of the country. He directed the authorities to identify suitable land for sprawling campus of college for materialization of the proposal of the State Government by according top priority.

Chief Minister said that his Government was contemplating the proposal to make provision of limited seats in different disciplines in every Government degree college in the State and implement the condition of cut off mark so that limited number of students were admitted to the specific course. He said that admissions to all the college courses would be restricted to cut off marks so that every student was able to maintain academic standard and teachers would also be able to pay attention to every student individually.

Chief Minister also gave away the prizes to the meritorious and outstanding students in academics and extra-curricular activities.