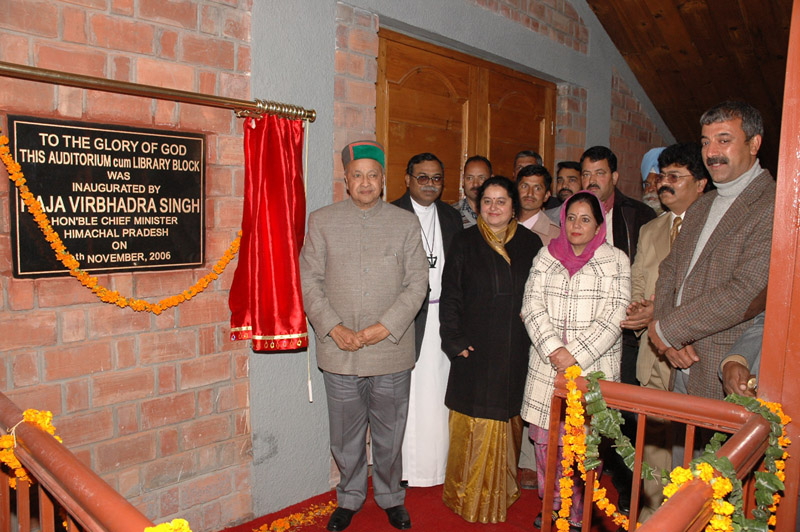 Shri Virbhadra Singh, Chief Minister gave a clarion call to the parents to get their daughters educated to teach their families. He was addressing the students, teachers, parents and guardians on the occasion of dedication ceremony of the Auditorium and Library Block of Auckland House School, here last evening.

Chief Minister said that his government had laid special emphasis over the education of girl students and specific programmes were launched for their education in the developmental blocks where female literacy rate was low. He said that the state government had made girls education from lowest to the highest standard free of any fees besides making them available scholarships, free text books and other incentives. He said that the State Government was making concerted efforts to make quality education available to the students by strengthening the infrastructure. He said that science was being introduced as a compulsory subject in all the senior secondary schools in a phased manner to equip students with necessary academics.

Shri Virbhadra Singh said that the women literacy rate in the state was much higher than the national average and ranked among top leading states in academic achievements. He said that the State had been awarded in education for top performance and endeavours of the Government were to maintain the achievement in right perspective. He said that education had been the top priority and efforts were afoot to encourage private participation in making education of par excellence available to make Himachal Pradesh a ‘Knowledge State’ of the country in coming few years.

Chief Minister appreciated the contribution of the Auckland House School in imparting quality education to the students, especially girls, who had excelled in different fields and brought laurels to the school. He said that the Auckland House School was a premier educational institution and known all over the world for quality education to girls. He said that the school had been upholding the highest educational standards and supplementing the endeavour of the state government towards bringing about qualitative improvement in education. He said that the additional auditorium and library hall would add to the cultural and other activities of the school children and contribute towards overall personality development of the students.