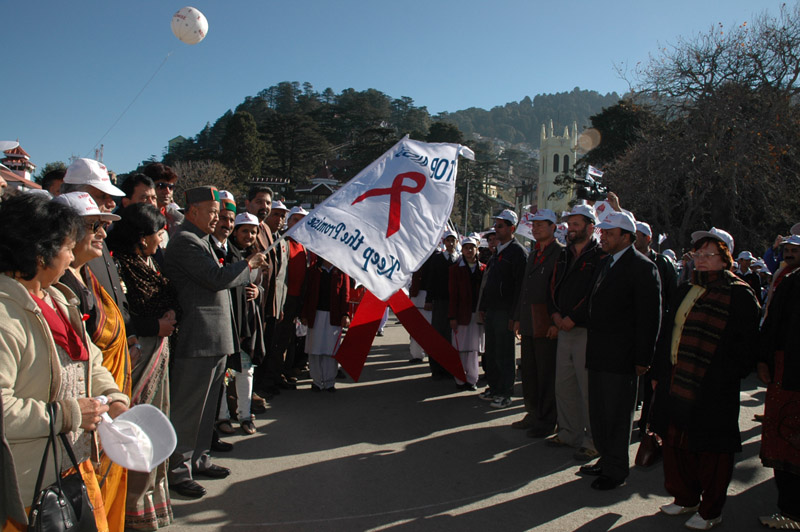 Shimla: Himachal Pradesh has over 90 percent awareness level, no transmission of HIV infection through blood and improved STD treatment behaviour. This was revealed by Shri Virbhadra Singh, Chief Minister, after he flagged off the Red Brigade AIDS Awareness Rally to spread the message of awareness amongst the people all over the State to observe the World AIDS Day at a State Level Function here today. The school children took out rally raising slogans of awareness to save the society from HIV/AIDS.

Chief Minister said that the State had best health indicators compared to many other states and ranked best amongst all the states in the country. He said that the vast health network and trained manpower had been instrumental in bringing laurels to the state in the Health sector. He said that 18 Targetted Intervention Projects were being implemented for the high risk groups in the state, 71 STI clinic locations were rationalized and strengthened. He said that to create awareness amongst the young generation, School and College AIDS Education Programmes were being implemented whereunder 912 High and Senior Secondary Schools had been covered besides 2,147 teachers and 2,026 peer educators were trained. He said that to keep pace with the modem technology, tele-counselling services were started from Shimla, Hamirpur, Dharamshala, Solan, Bilaspur and Mandi and 45,069 people were benefitted.

Shri Virbhadra Singh said that the people of the state were volunteer blood donors as 69.31 percent blood donors were volunteers who had supplied blood to 13 modern Blood Banks all over the state. He said that efforts were afoot to open three new Blood Banks. He said that 13 Voluntary Counseling and HIV Testing Centres were functioning in the State at the district headquarter level and at IGMC, besides one Community Care Centre had been established at Swami Shri Hari Giri Hospital, Kakira, Chamba, one Anti-Retroviral Treatment Centre made operational at IGMC, Shimla, Prevention of Parent to Child Transmission Programme was launched besides establishing one Drop-In Centre at Paonta Sahib where counseling and treatment facilities were available to the HIV positive patients in the state.

Chief Minister emphasized the need for creation of awareness amongst people from all walks of life, especially the young children, so that they were made aware about the disastrous affects of the dreaded disease for which prevention was the only solution at present. He said that exhaustive research was in progress at the world level and some curative drug or treatment was expected in coming time. He also appealed to the voluntary organizations to supplement the endeavour of the state government in making all awareness campaigns a grand success.