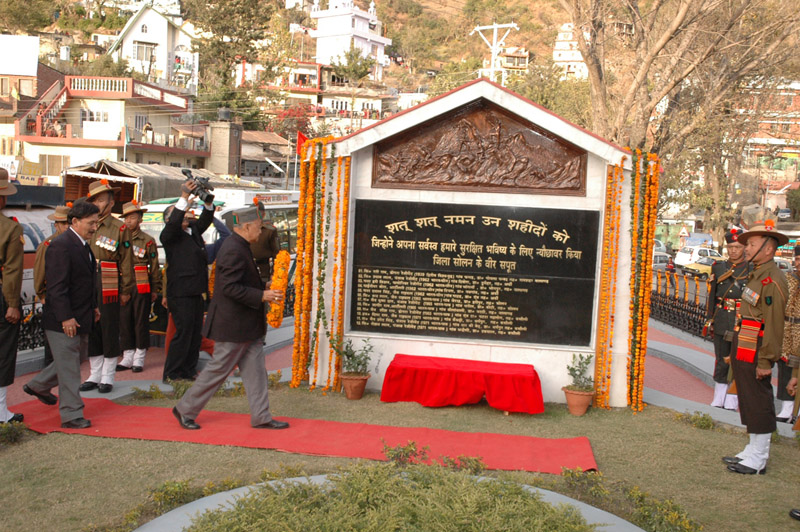 Virbhadra Singh, Chief Minister today dedicated the â€˜Shaheed Samarkâ€™ at Chambaghat, Solan and unveiled the Statue of late Capt. Sanjay Chauhan, Shourya Chakra Winner of the area, at a ceremonial function organized by Shwalik Educational and Social Society. He honoured the wards of the martyrs hailing from district Solan to mark the occasion.

Shri Virbhadra singh paid rich tributes to the martyrs who laid down their lives for the nation and upheld the rich tradition of the armed forces. He said that it had been possible for the country to win freedom due to the sacrifices of a number of unknown freedom fighters who fought tooth and nail for the cause.

Shri Virbhadra Singh said that out of the four Param Vir Chakra awardees of Operation Kargil, two were Himachali soldiers which was a great honour to every Himachali. He said that the people of the State were grateful to the martyrs and indebted to their families for the contribution they made in guarding the national boundaries. He said that besides other incentives, the State Government had enhanced the annuity and turned the same into one time grant and decided to give Rs. 25 lakh to Param Vir Chakra Winner, Rs. 15 lakh to Mahavir Chakra Winner and Rs. 10 lakh to Vir Chakra and Shourya Chakra winners.

Chief Minister said that his Government was committed to safeguard the interests of the families of the martyrs, serving and ex-servicemen and had formulated a policy providing various incentives and benefits to the wards and families of the soldiers. He said that the sacrifices made by the martyrs were incomparable and a source of inspiration to the coming generations. He said that people needed to extend respect and honour to the martyrs and also help the families in best possible way.

Shri Virbhadra Singh said that State had provided all facilities for setting up of 8 poly clinics in different soldier concentrated towns so that specific attention was paid towards the health care and medical services rendered to the wards of the soldiers. He said that State had also set up the Ex-Servicemen Welfare Corporation to cater to the welfare needs of the serving, ex-servicemen and their families. He said that welfare of the families of soldiers was being accorded top priority and best efforts was being made to re-employ and rehabilitate the retired soldiers. He said that reservation was also being provided to the ex-servicemen so that they were re-employed suitably.

Chief Minister said that his Government was committed to safeguard the interests of soldiers in all respects and added that his government had adopted uniform rehabilitation policy for the soldiers, ex-servicemen, their wards and other para-military forces. He said that contribution made by them was being recognized by the State Government so that befitting tribute was paid to the martyrs for their valuable contribution towards the nation.

Later, Chief Minister also dedicated the tribal hostel to the students of Government Degree College, Solan constructed at a cost of Rs. 87.22 lakh and hoped that the hostel would facilitate the students in carrying out their academics more conveniently.