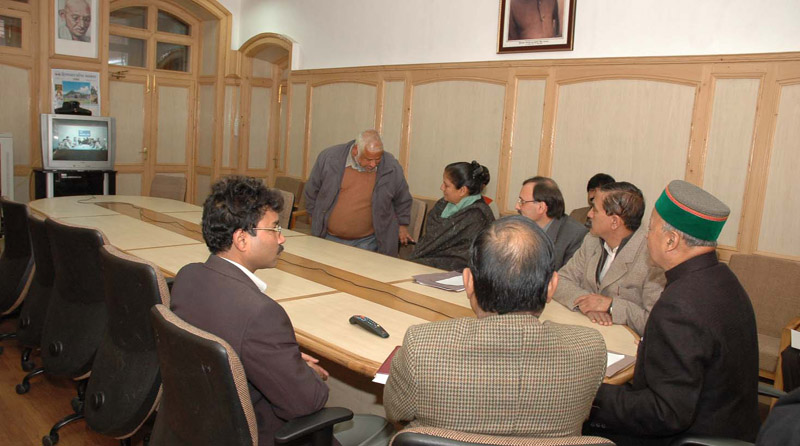 Shri Virbhadra Singh, Chief Minister addressed the First Video Press Conference in the State and interacted with the media persons of North Zone and Central Zone from his Chamber here today.

Shri Virbhadra Singh replied to the various questions raised by media persons during the press conference and informed them of the developmental activities of the State as well as of Kangra and Mandi districts. He said that the State had emerged a role model due to the sustained efforts of the successive Congress Governments in the State. He said that the State Government was actively considering opening of medical college at Mandi, airstrip in the Balh valley and had sanctioned cement plant near Sundernagar. He said that the Winter Session of the Himachal Pradesh Vidhan Sabha will be held in the new Vidhan Sabha Buildidng at Tapovan near Dharamsala during the last week of December, 2006. He said that he would tour districts Kangra, Hamirpur and Una from first week of January, 2007 and also informed that the Gaggal Airport would be fully operational in the near future and the length of the runway would also be expanded to accommodate the landing of the bigger planes. He also updated the media persons about the latest status of major developmental projects in the State.

Chief Minister hoped to continue the practice of holding video press conferences with the media persons of all the districts in a phased manner so that he could directly speak to them and reply to their questions. He appealed to the media persons to extend their cooperation in giving coverage to the policies and programmes of the State Government in media so as to disseminate information to the remotest corner of the State and added that best utilization of modern information technology would be made to be in regular contact with the press throughout the State. This will strengthen the bond between the Government and public.