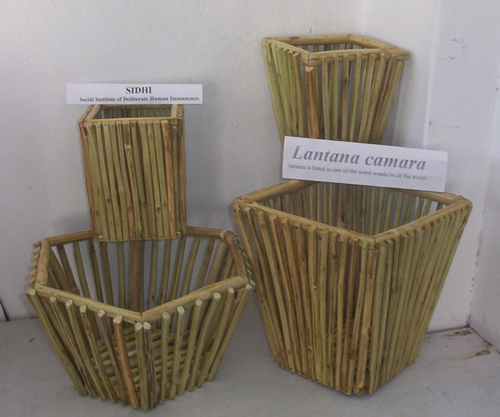 Lantana Camara is listed amongst the worst weeds in the world. Lantana camara of family Verbinaceae has become a serious problem for tropical countries, where it has invaded millions of hectares of land. Lantana was introduced in India in 1809 (Culcutta Botanical Garden), as an ornamental plant due to its beautiful aromatic flowers. Prolific seed production and easy dispersal helped it in escaping cultivation and becoming a pest, with serious dimensions. Presently, it has spread all over the country. It gives flowers almost throughout the year. This weed is posing serious problems in plantation forestry. Chokes all other vegetation and become the dominant species.

In India about 7-8 species of Lantana are found. Some important species of Lantana in India are Lantana Camara, Lantana Indica, Lantana trifolia, Lantana Canulata etc. Lantana is a serious problem in India in various locations. Complete eradication of Lantana form every area is very -very difficult task. Villagerâ€™s farmers, planners and Administrators are facing this serious problem every day. Attempts to control Lantana failed. In various countries different insects were applied on lantana but they affect of the growth in insignificant level. Control of Lantana by the use of chemical has given good results but due to poison great care is required. All measures are useless because a very large area is involved. Manual eradication, Biological control and Chemical methods are few for lantana. 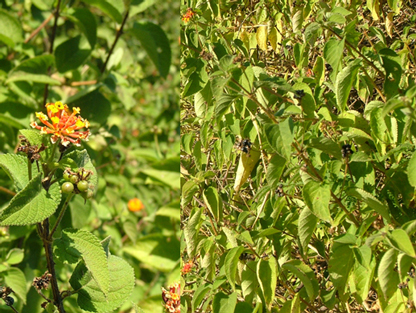 The Various measures to control this weed have almost failed or are not cost effective therefore none of them have become popular. An attempt has been made to create use as it can be used for medicinal purposes as well as market commercially. According to Indian researchers Lantana could be put to use for controlling weeds in rice fields. The Social Institute of Deliberate Human Immanence (SIDHI) including many other organizations which has been studying this weed has started to make use of Lantana as cheap furniture, Utility articles, Mosquito repellent & a medicine, for various cures particularly for skin related diseases. According to sources the oil extracted from Lantana fetches a very high price. The oil can be extracted by steam distillation. In USA it is used as an anti-septic in baths and for various skin diseases. An attempt to use this weed in more effective way in our daily life may stop the Green Fire.