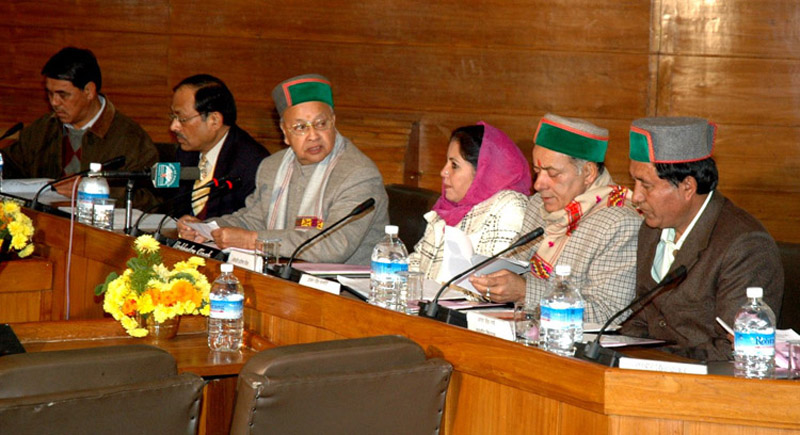 Rs. 389.51 crore had been earmarked for speedy development of the tribal areas of the State during current financial year. This was revealed by Shri Virbhadra Singh, Chief Minister while presiding over the 37th State Tribal Advisory Council Meeting here today.

He said that the State Government had earmarked 9 percent of its Annual Budget for the developmental programmes of tribal areas and added that no diversion of that budget was permitted in any manner. He said that Rs. 165.68 crore had been provided under the Sub Plan of the State Plan, Rs. 149.21 crore from Non Plan while an additional sum of Rs. 74.85 crore were made available under Pradhan Mantri Gram Sadak Yojna (PMGSY) for road connectivity in the tribal areas.

Chief Minister said that his Government considered accelerated development of tribal areas as its prime responsibility besides bringing such areas at par with other areas of the State. He said that most of the tribal areas had limited working season and every developmental activity was being undertaken on war footing so that optimum utilization of working season was ensured. He said that laxity in achieving the given targets was being viewed seriously.

Shri Virbhadra Singh said that the endeavour of the State Government in spreading the educational network was showing encouraging results and the literacy rate increased by 17.23 percent in ten years. He said that the tribal areas had 53.15 percent literacy rate in 1991 which increased to 70.38 percent in 2001 and was expected to have been increased further between the years 2001 to 2006. He said that tribal hostels were being constructed all over the State by spending Rs. 8.13 crore which included H.P. University, Rajkiya Kanya Maha Vidyalya, Shimla, Govt. Degree Colleges, Solan and Dharamsala to facilitate tribal students and added that 53 new schools including one degree college were also opened.

Chief Minister directed the authorities to speed up Bhawa-Mudh road construction work, which on completion would reduce the distance between both the destinations by about 100 kms besides boosting adventure tourism activities in the Pin valley and connecting more villages on either side of the valley. He said that one of the achievement of his Government had been to connect the Pangi valley with district headquarter Chamba with jeepable road through 15000 feet high Saach Pass which would further be widened to ply regular buses for the benefit of the people of Pangi valley. He said that PMGSY fundings were also being procured for adding villages for road connectivity. He directed the authorities to take up the Killar-Sansari Nallah GREF road widening, improvement and maintenance issue with quarter concerned at the Government of India level to make more funds available to the road besides exploring possibilities of making some state plan for achieving the objective.

Chief Minister directed the HPSEB authorities to explore the possibilities of outsourcing the Bhawa-Pooh-Kaza Tower Line Project and make the same a time bound project. He emphasized the need for creation of the work force assigned to achieve the target in a time bound manner. He also directed that Thirot, Rongtong and Rukti power houses of tribal areas to be repaired to generate power to their capacity not only to meet the local demands but also for supplying the same to the feeder outside the valley. He also directed them to maintain quality power supply to the tribal consumers.

Shri Virbhadra Singh said that Mrikula Devi temple at Udaipur in Lahaul & Spiti district would be got restored by the Archeological Survey of India to its original form or would request them to handover the same to State Government so that immediate action could be taken to restore the same by the experts. He directed the authorities to open a Timber Wood Depot at Yangthang in district Kinnaur to provide timber wood uniformally in all the tribal areas. He revealed that 743 newly trained veterinary pharmacists had been appointed to man the veterinary health institutions and added that the Mani Mahesh Nyas would be brought and made functional under the provisions of H.P. Religious and Public Places Endowment Act, 1984.

Shri Virbhadra Singh said that Forestry Scientists would be assigned the task to find remedy for saving the willows and other plantation from APHIDS and COCCIDS insects besides educating farmers of Lahaul valley about the suitable plantation. He said that the State government would also examine the issues related to the export of Chilgoza and obtaining its permits. He said that a petrol pump would soon be opened at Pooh added that special plan was being formulated for the tribal tourism promotion in near future.

Smt. Pratibha Singh, MP, Mandi Parliamentary Constituency informed that work on 9 km long Rohtang Tunnel was likely to start soon as the first instalment of Rs. 1355 crore had been cleared by the Union Cabinet. She said that it would help to provide connectivity to the Lahaul valley throughout the year. She added that the Union Ministry of Surface Transport had been requested to provide adequate funds for the improvement and maintenance of roads under Border Roads Organization in the State.