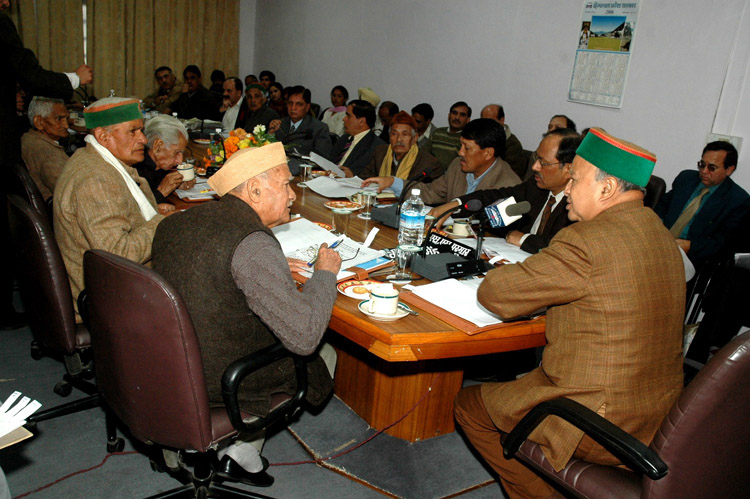 Himachal Pradesh was contemplating over the proposal to raise a State-Level Freedom Fighter Memorial at suitable place besides Suket Satyagrah Memorial in Suket area of district Mandi as a mark of respect to the greet freedom fighters who sacrificed their lives for the success of the freedom movement. This was revealed by Shri Virbhadra Singh, Chief Minister, who is also Chairman of the State Freedom Fighters Welfare Board, in its 14th Meeting held here under his chairmanship today.

Â· Special Scheme for soft loans to freedom fighters to be formulated.

Â· Rs. 10,000 given as marriage grant to daughters of freedom fighters

He said that a suitable place would be selected in consultation with the freedom fighters and intellectuals for raising the State Level Freedom Fighter Memorial to pay homage to the warriors of the nation hailing from Himachal Pradesh. He said that Suket Satyagrah was the one major non-cooperation and disobedience movement launched from within the State and many freedom fighters laid their lives to spread the movement to other areas of the State and awaken the masses against the foreign rulers. He said that his government was considering raising a separate Suket Satyagrah Memorial in memory of the freedom fighters of the erstwhile Suket state at suitable location so that the young generation could know about the great warriors who contributed by sacrificing their lives for the independence of the country.

Shri Virbhadra Singh said that the State was proud of its veteran freedom fighters who were the source of inspiration to the young generation for inculcation of patriotism and nationalism as inherent qualities in their personality. He said that the life histories of the prominent freedom fighters was also being taught to the children alongwith their regular studies in schools. He reiterated the resolve of his government to extend due courtesy to the freedom fighters and provide best of the benefits to them and their wards to help them lead a socially comfortable life.

Two minutes silence was observed to pay homage to the veteran freedom fighters who had left for their heavenly abode between the period of the last and current meeting of the Board.

Shri Susheel Rattan, Vice-Chairman, State Freedom Fighters Welfare Board, proposed vote of thanks and said that it had been under the patronage of Shri Virbhadra Singh, Chief Minister, that the freedom fighters of the State were being provided best of the benefits and incentives besides due honour and respect at all the functions and celebrations. He also apprised the Chief Minister of various other personal grievances of the freedom fighters.

Shri S.S.Parmar, Chief Secretary, welcomed the Chief Minister and the non-official members of the Board and offered his tribute on behalf of the State Government to the freedom fighters who had dies in between the last and current meetings. He also detailed the benefits being delivered to the freedom fighters by the State Government from time to time and said that it were best in the country.

Shri V.C.Pharka, Secretary GAD apprised the Board of the agenda items of the meeting and the action taken by different current departments to settle the issues.