Dr. Salz is world renowned adventurer, cultural anthropologist, explorer, and journalistâ€”has made a life out of adventure. He has traversed most of the remaining blank spots on the map, living with the Turkestani Khazaks of Central Asia, riding with the Gauchos of Argentina and nomads of Mongolia, and searching for Shangri-La among the lost valleys of the Himalayas. For three months, he led the Chinese army on a merry chase while traveling in disguise with the Khampa nomads of Tibet. Traveling the Andes on horseback, skis, and foot, he traversed the Southern Patagonian Ice Cap, scaled its unclimbed summits, and followed in the footsteps of Butch Cassidy and the Sundance Kid. He has explored lost cities along the Amazon. And, sailing in a traditional reed boat, he became the first person to sail around Lago Titicaca, the sacred lake of the ancient Incas and the world’s highest navigable waterway.

Jeff has successfully translated his lifetime of explorations into motivational presentations. As one of the USA’s foremost authorities on bringing the spirit of adventure into daily life, he is founder and president of Salz & Associates, a management consulting organization dedicated to innovative approaches to personal and organizational change. A partial list of his clients includes Aetna, Motorola, GTE, Pacific Bell, Hewlett Packard, and The Walt Disney Company. 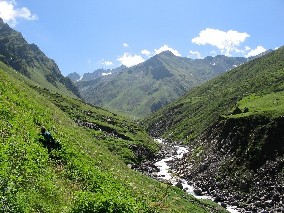 Please check some of his motivational videos!

My Himachal group and the team associated with Blog welcomes Dr. Salz and his group in this new endeavour and hopes he would love Himachali hospitality. We wish him luck and hope he brings good stories back to US!

Few excerpts from his post, Himalaya Bound: Lessons in Leadership or Confessions of a Disabled Amateur

The greatest happiness comes not from attaining oneâ€™s dreamsâ€¦

but in finding ways to help others attain theirs. Last year, I reconnoitered the peak. This year I have already sent an advanced team to rebuild bridges washed out by this yearâ€™s monsoon storms. Another to scout out the route. Iâ€™ve done all I can to advance the teamâ€™s odds of success. Even if I cannot climb this peak, I believe some members will do so and have the once-in-a-lifetime experience of standing atop a glorious untrammeled summit. Standing down below, as professional trip leader and mountain-loving â€˜amateurâ€™, my satisfaction will equal – perhaps even exceed – theirs.