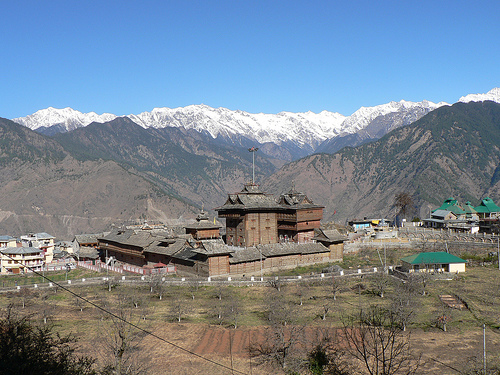 Legend from: Shri Bhima Kali Ji temple website.
With its unusual architecture and wealth of wood carvings, Shri Bhima Kali Temple at Sarahan is the major monument that is duplicated no where else in the erstwhile hill states. Dedicated to the mother goddess Bhimakali presiding deity of the Rulers of former Bushahr Sate, situated at 2150 mtrs MSL this magnificent temple is about 180 kms. from Shimla.With its capital at Shonitpur this former princely state was extended up to entire area of Kinnaur where for somtimes Lord Shiva disguised himself as Kirat.Today, the then Shonitpur is known as Sarahan. Banasur, the ardent devotee of Lord Siva, eldest among the one hundred sons of great oblative demon King Bali and the great grandson of Visnu votary Prahlad, during the Puranic age was the ruler of this princely state.

Due to Usha-Anirudh affairs Lord Krishna fought here with him and in this battle Lord Siva stood against the former.The legend goes that head of the defeatd king Banasur was buried in front of the entry gate now marked as a raised platform to the first courtyard. Reaching a few steps up from the road to this paved courtyard pilgrims enter into a different world. After Banasur, Pradyuman the incarnation of cupid and the son of Lord Krishna became the Ruler of this Kingdom. Since then this Kingdom was governed uninterruptedly by the descendants of this dynasty till the end of the princely states in independent India.In the State capital this ruling family got constructed a splendid temple palace complex and recognised mothergoddess Bhimakali as the presiding deity of the ruling house.

The goddess according to another legend was consecrated earlier in the wooden stick of a sage Bhimgiri. Another hearsay about the manifestation of the goddess is reported to the Daksha-Yajna incident when the ear of the Sati fell at this place and became a place of worship as a Pitha – Sthan.Presently in the form of a virgin the icon of this eternal goddess is consecrated at the top storey of the new building. Below that storey the goddess as Parvati, the daughter of Himalaya is enshrined as a divine consort of Lord Siva. Another three temples in this complex are dedicated to Lord Raghunathji, Narsinghji at and Patal Bhairva Ji – the guardian deity.

An important deota often has another deota as its wazir and the wazir occupies a small temple adjoining the main one or his image is placed near the door.Thus Maheshra of Shingra is wazir to the temple of Bhima Kali at Sarahan ( gazetteer 1910 ). According to a report an erratic rock stone of a roof of the house, fixed on the way at the main entrance of this temple narrates the story of a royal traitor of ‘ Thoru’ village. Now under the chairmanship of present Hon’ ble Chief Minister of Himachal Pradesh Shri Virbhadra Singh the temple trust is working effectively and efficiently .Twelve ancient temples are included under the aegis of this trust.