This is what wikipedia has to say about Dalip Singh, our own pahalwaan who has made it big in WWF wrestling and now is moving towards Hollywood.

Dalip Singh (born August 27, 1972 in Dhirana, Himachal Pradesh) is an Indian powerlifter and professional wrestler. Singh is currently working for World Wrestling Entertainment in the United States of America on its SmackDown! brand under the ring name The Great Khali. Before embarking on his professional sports career, Singh was an officer in the Punjab state police, champion bodybuilder, and a Pehlwan athlete. 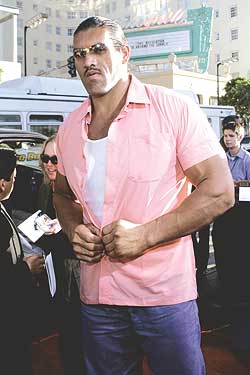 Dalip Singh was born into a poor family in the village of Dhirana in the state of Himachal Pradesh and is the third of eight siblings. At a young age, he earned a daily wage as a roadside stone breaker to help provide for his family. When asked about the size of his family members, Singh said, “all other members of my family, including my parents and siblings, are of normal height, but my grandfather was very tall.”

In 1993, Singh was still working as a road laborer in the Himalya hills when his life’s circumstances began to change. By this time he had tried his hand at many sports. He excelled in all of them, but showed exceptional talent in bodybuilding. The Director General of the Punjab Police Department took notice of Dalip and helped him join the police force. The change in employment allowed Singh to further his body building training and he subsequently won titles of Mr. India in 1997-98. His success and hard work led him to train as a wrestler in the United States of America in 1999, where he developed the skills necessary to compete on a global stage, enabling him to win numerous wrestling titles in Japan, where he is currently a very popular figure. Singh’s training schedule consists of two hours of weight training, morning and evening, every day. Maintaining his size requires a strict, and intimidating daily dietary regimen. Dalip consumes five gallons of milk, five chickens and two dozen eggs along with chapatis, juice, and fruit daily.

Dalip Singh’s goal in life is to support his family and aid the entire village that is his home. He hopes to benefit the welfare of disabled persons and children born into poverty. He is an active mentor to young people in Punjab, encouraging them to stay away from drugs and urging them to find discipline, health and success by taking up sports.

Under the ring name “Giant Singh“, Dalip Singh became a pro wrestler for All Pro Wrestling in the United States of America, making his first appearance in October 2000, when teaming with Tony Jones against the West Side Playaz 2000.

On May 28, 2001, Brian Ong volunteered to receive a flapjack from Dalip Singh, a wrestler being specially trained by All Pro Wrestling. Singh did this move with two others in the gym that night, including one of the trainers, so Ong could see how it was done. Brian Ong messed up the move, as he grabbed Singh’s shirt instead of pushing off his back as the coaches had instructed him. He landed wrong and suffered a severe injury. He had a previous concussion and the second consecutive concussion proved fatal for Ong. This led to Singh inadvertedly causing the death of trainee wrestler Brian Ong. All Pro Wrestling lost a lawsuit brought by Ong’s family over his death, and were forced to award damages of over $1.3 million to his parents.

In August 2001, Singh was brought into New Japan Pro Wrestling by Team 2000 leader, Masahiro Chono, along with another big man, Giant Silva. The two teamed for the first time at the Tokyo Dome in October, labelled “Club 7” by Chono, and they defeated Yutaka Yoshie, Kenzo Suzuki, Hiroshi Tanahashi and Wataru Inoue in a Handicap Match when Silva pinned Tanahashi and Inoue at the same time. Singh suffered his first loss in a tag match at the Tokyo Dome in January 2002, being cradled by Hiroyoshi Tenzan. He suffered another big tag defeat during March, being pinned by Manabu Nakanishi, and falling to a German suplex hold. His most critical loss came in August at Tokyo Nippon Budokan though, when, after a falling out, he was pinned by Silva in a singles match.

On January 2, 2006, Singh was signed to a contract by WWE and assigned to the Deep South Wrestling developmental territory for training. With Daivari by his side, the un-named Singh debuted on WWE television on the April 7, 2006 episode of SmackDown!, attacking The Undertaker during the course of his match with Mark Henry, causing a no-contest.

The next week he was identified as “The Great Khali“. He made his in-ring debut on the April 21, 2006 edition of SmackDown! defeating Funaki in a squash match.

On the May 5, 2006 edition of SmackDown!, Khali signed a contract to face The Undertaker at WWE Judgment Day on May 21, 2006. Later that night, he attacked Super Crazy, Kid Kash and Nunzio.

On the May 12, 2006 edition of SmackDown!, Khali was pitted against Rey Mysterio, whom he decimated with just a few blows. The only offense Rey could get in was a Springboard Dropkick, which had no effect on Khali. Soon Khali handed Rey Mysterio a crushing defeat.

It is rumored that Khali may be released from the WWE soon, due to his brash style in the ring. It has been stated by WWE that he may accidentally injure others in the ring, because of his stiff, overpowering wrestling style.

Singh played the role of “Turley” in the 2005 remake of the film The Longest Yard.

Singh appeared as a surprise guest on Late Night with Conan O’Brien with scheduled guest Adam Sandler on May 26, 2005. Even though he doesn’t speak much English, Singh did say that he was 7′ 2″ and weighed 408 pounds. 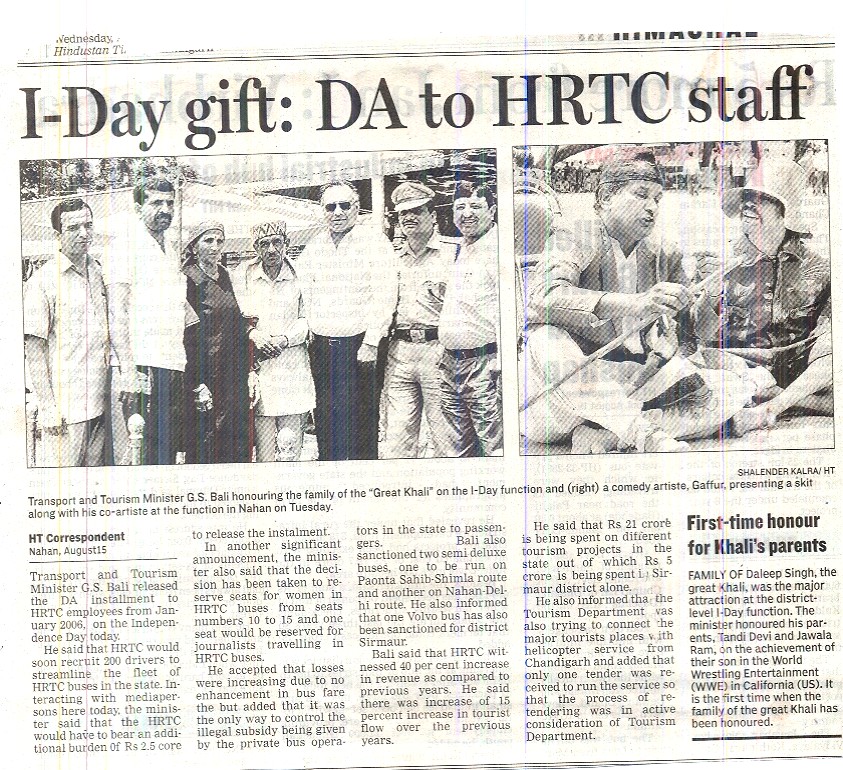