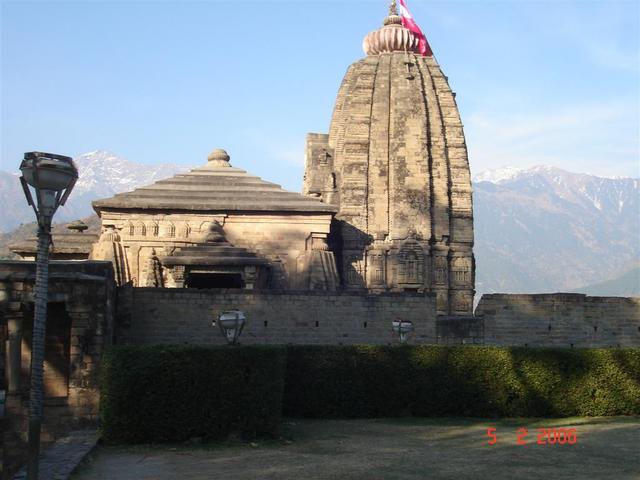 Another article on Tribune about illegal mining.

I am from Baijnath, my childhood is spent just outside the temple, where my parents had a rental apartment which was on the boundary line of park outside of Shiva temple. I spent almost all evenings playing in the temple or outside of it. Endless days, I still remember where we use to be so excited to see the Shiva Lingam covered with huge butter pile on every Lohri, or for every Krishna Janam Ashthami the rath yatra use to start from there. Every Shivaratri the grand festival inside the temple.

While we were in college we had our gossips outside the temple, for every exam we touched the holy stairs or for that matter every day while going to school we vowed our head outside the temple or asked for forgiveness.

So many memories and I am sure they are not just mine, every one from the area must have visited the temple at least once. Every one must have asked for their well being, for their good fortune.

I wonder how many of us are thinking about the well being of the temple now!

I wonder if myHimachal group is at a stage where we can ask each and every member to at least write a letter to the local SDM and ask him to enforce the rule or for that matter put a PIL in local court to totally close and check illegal mining. To tell you the truth, this is such an agony of life, we stand no where as of now to even raise our voice for the temple we pray for our well being every day!!!

There are more than 20-40 members from Baijnath area, I wonder even for a single minute it came to their mind that they together can do a lot, I wonder even if they would reply to this message.

And here we talk about philosophy to change society, caste ism and what not.

A humble request to all members, together every one can do wonder, but for that you all need to wake up! And I donâ€™t know why our society always sleeps, would we wake up when due to our negligence a place of worship would be over.

First local mining mafia destroyed the whole environment and now small mule owners who feed their family are destroying although innocently. I wonder even they know how ecology works!

The local mining/liquor mafia is so strong, I wonder even if the local government bureaucrats fear fir their lives. Worst even, the same mafia people pray inside the temple for expansion of their illegal empire.

I wonder how many of us come together for various noble causes myHimachal group is working, as they would prove our real worth.

Few yet amazing facts about the temple:

Since the local priest started working in the temple, almost 30 years back, the temple Lingam has gone down by almost 3

feets, Kalyuga, as they say, it will vanish one day and reason we all know, God’s own places will go down and Kalyuga would become more stronger.

Around the Lingam a cloth is kept always in circle to hide the space, below the lingam there is water, and that water is more than 40 feet deep or may be unknown depth, yet the huge ancient temple is standing since ages.

This is the temple where Ravana did his worshipping and the havan kunda is still there.

Any one who tried to organize Dussehra in Baijnath, his/her family had to suffer with the loss of life in the very same year.

Constructive discussion refines society but a discussion which takes you no where is useless. Endlessly discussing a topic which is not resulting any changes is waste of every oneâ€™s time. Lets all pledge to achieve which we all talk and dream, lets work together, lets form such a strong organization that you raise your voice, system changes, you raise a voice people follow you, lets educate those who in innocence are destroying their own future. And al l this is possible by working together.

myHimachal group is an effort in that direction and its essential that we all work together.
We all pray to GOD, think deep within you if a temple goes down where we all would go?

A visit Baijnath yesterday revealed that the ancient Shiva Temple of the town built in 1204 AD is facing threat because of reckless quarrying and mining in the adjoining Binwa river. The historic temple is situated on the banks of this river. The historical monument, encompasses the essential features of the Nagara temples.

It is stated that this temple was built by two local merchant brothers Ahuka and Manyuka. It lies on the main road to Kulu- Lahual Spiti, the ancient route to Central Asia.

Raja Sansar Chand, a Katoch ruler of Kangra renovated the temple in the 19th century, but Aurel Steil, who studied the monument in 1892, said it had not undergone much alteration.

At present the temple is under the control of the Archaeological Survey of India. It has spent lakh of rupees on maintenance and development of the temple complex over the past 10 years.Thousands of tourists visit the temple every year. The state government has constituted a trust to manage the affairs of the temple and the SDM, Baijnath, is its president.

The retaining wall of the temple is on the verge of the collapse. One portion of the temple situated on the left bank of the Binwa river has developed cracks because of reckless mining in the river.

It is sad that the temple which remained intact during the major earthquake in Kangra in 1905 has been badly damaged by the unscientific quarrying in Binwa river in the past 15 years.

Mr Sandeep Kumar, SDM, Baijnath, has fined over 100 persons for illegal mining in the Binwa in the past one year. He has a impounded number of tractors and other vehicles involved in quarrying and mining. He has also banned the entry of mules in the river.