Vijay Kumar and Pemba Tamang of India pose with their Gold medals for the Men’s 25m Rapid Fire Pistol Pairs Final at the Melbourne International Shooting Club during day Four of the Melbourne 2006 Commonwealth Games March 19, 2006 in Melbourne, Australia. 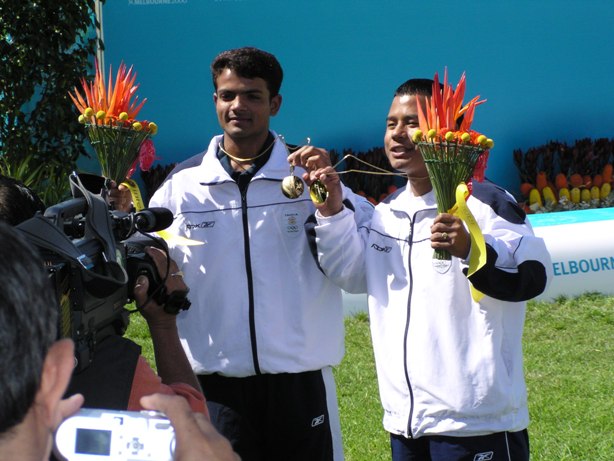 Partnering with Pemba Tawang, Vijay Kumar struck gold in the 25 metre rapid-fire pistol pairs at Melbourne Sunday. He is also to take part in the individual competition of the same event Thursday.

Vijay Kumar hails from Harsaur village of Hamirpur district, located near the shrine of Baba Balak Nath at Deotsidh.

Vijay’s father Banku Ram – a former soldier – was all smiles when a team of reporters met him at his residence Wednesday.

Banku Ram said he knew that his son would always keep the national flag flying high and he had proved this in Australia. He also expressed hope that Vijay would win another gold in the individual event.

Vijay’s aged grandmother Bramhmi Devi too was in high spirits, saying her grandson was a genius.

The local panchayat or village council has decided to honour Vijay once he returns from Australia.

Cash reward for winners from HP