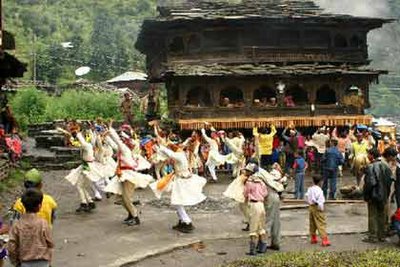 Recently while browsing Indira Gandhi National Centre for the Arts website I came accross an exhibition “Valley of gods” by Virendra Bangroo and Krzysztof Stronski. This link provides a detailed information about the local village Gods as well as few snaps. You can order fine prints also from here. 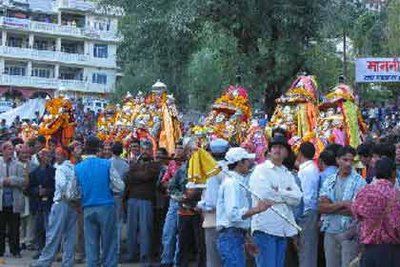 Kullu is also known as the “Valley of Gods” despite the facts that gods are worshipped all over Himachal Pradesh. This is because the tradition of worshipping gods is very ancient in the valley and the number of gods is quite large – over 300. Each village has a god, in some villages there may be two or more gods. The form of worship of gods is different and unique here. Here the gods act as moving beings rather than being statues fixed within the temple. Each god has his own temple but they are generally devoid of any statue.

Gods are represented by ratahas (palanquins), studded with metallic mohras (faces), adorned with variegated cloth lengths and flowers, and lifted on the shoulders by two men. Women have hardly any role to play in the affairs of the gods. The rathas are accompanied by band of deity’s musicians, attendants, followers and carriers of symbols of royal or divine artifacts etc. The rathas often become animated or possessed of spirits and show various human moods and behavior like anger through rushing frantically, or happiness by dancing in a leisurely manner, meeting with friends, etc. besides actually speaking through the medium of gurr (priest) an answering to various queries of the devotees.

The gods of Kullu can be classified into three classes. The first are the ancient rikhis and pious women of epic character .The second type belonging to the Naga (serpent) class and the third must be tribal chiefs and heroes.

The gods in the form of holy spirits have had their presence in the valley since times immemorial. They not only control their areas of influence but also the daily routine of the inhabitants. The spirits maintain their influence by entering the physical body of chosen men called gurr whom the people consult regarding their ailments, their perplexities and otherwise. On festive occasions people become ecstatic as they join in the singing and dancing along with the holy spirits. This scene is captivating in the extreme.