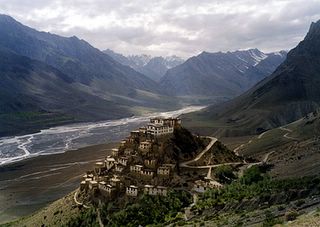 Ki Monastery is a thousand-year-old Buddhist gompa located in the remote region of Spiti in the Indian Himalayas. The passes into this area are blocked by snow for six months of the year, thus the Tibetan culture here has remained intact. Photo by Jannaca Chick.

The hill-top Ki monastery is the most prominent feature of the Spiti valley. This monastery is an outstanding example of the monastic architecture which developed during the fourteenth century in the wake of the Chinese influence.

The monastery was plundered in the middle of the seventeenth century by the Mongols.In the nineteenth century, it again suffered three brutal attacks.

The successive trails of destruction and patch-up jobs have resulted in a haphazard growth of box-like structures, and the complex now resembles a defensive fort. Among the other important monasteries in the Spiti valley are an ancient temple at Lha-lun, and another temple complex at Dhankar. The temples at Dhankar seem to be precariously dangling between heaven and earth.