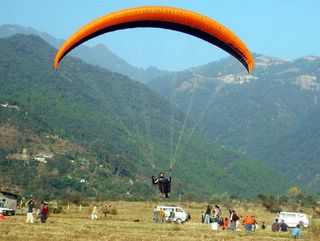 Gonomad.com has discussed the travel to McLeod Ganj, DharamShala, HP in great detail. Mostly McLeodGanj is now taken as a Tibetean colony more rather than as a part of Himachal because the spirtual leader of Tibet, Dalai Lama staying over there.

During last decade many Hollywood stars have become great followers of HH Dalai Lama so this kind of exposure is of course understandable.

Richard Gere, the star of Chicago?, Shall We Dance, The Jackal, American Gigolo and most famously from Julia Roberts starred Pretty Woman is one of the most distinguished followers. Mr. Gere is also well known AIDS activist and works very closely with Indian NGOs for AIDS awareness.

Goldie Hawn who is Kate Hudson mom is also one of the best-known followers of Dalai Lama. Of course Steven Seagal the action star best known for martial arts in movies is also best known for showing Buddhist religion in most of his movies and in many he also shows himself being a monk.

Beautiful monastries around Dharamshala are spread all over places. Like in Bir they have a large Budhist University.

In todayâ€™s world for west Dharamshala is related to Dalai Lama but for any Hindu Kangra district (county), for which Dharamshala is district head office is known for Hindu pilgrimage. Maa Brajeshwari temple in Kangra, Maa Chamunda Ji, Maa Jawala Ji in JalawalMukhi, Maa Chintpurni Ji and Baijnath Shiv Temple in Baijnath are best known Hindu pilgrimages. All the Maata temples in Navratri are heavily crowded and are visited as such all year long.

Billing which is near to BIR is World one of the best places for Para and Hang Giliding. The way the valley is it is taken as best for learners as well as experienced gliders. Every year the state government is organizing a Pre World cup and is hoping for organizing the World Para Gliding competition in near future.

Most people know McLeod Ganj for Dalai Lama but for most of the Hippies from around the world it is also known as drugs haven. Bhang and Ganja is a free flow and so is it in most of the places in Himachal, like Kullu and Manali where it has now become a major problem.

However Dharamashala is known for its natural beauty and peace loving nice people of Himachal.

Those who are interested in visiting this place may find information related in this link: