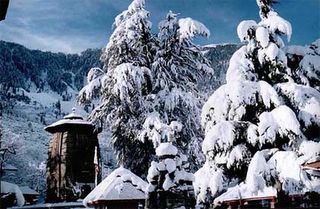 A view of the snow-covered Bharmani Temple and deodar trees after a heavy snowfall in the Bharmour area of Chamba district in Himachal Pradesh on Monday. Â— PTI

BHARMOUR is a place which not many people are familiar with. In the olden times, it was called Brahmpura and was the capital of Chamba. A small, sleepy hamlet in Himachal Pradesh, it comes to life in the months of August and September when yatris going to Manimahesh stop here. Manimahesh is 26 km from this village. During these two months the small streets of Bharmour remain packed with enthusiastic devotees, sadhus and trekkers. They all rest here to refresh themselves before proceeding on their journey.

The 65-km-long stretch from Chamba to Bharmour can be strenuous and taxing, for the road is narrow and rough. On both sides of the road are huge rocky mountains kissing the sky. The road runs along deep gorges and the ever-changing Ravi river, sometimes narrow and noisy, and sometimes wide and calm. All along the road, the beauty of the glimmering snow-covered mountains against the deep blue sky greets the visitors and if it is a clear day, the majestic Kailash Parbat can also be viewed.

Bharmour is known for its Chaurasi (eighty four) sidhas or shivlings. In the main square there are several temples big and small of different gods and goddesses. The temple of Narsingh was built in the 10th century by King Sahil Varman. The biggest one is that of Manimahesh, probably constructed in the 6th century. The two other temples of great importance are those of Goddess Lakshaya Devi and Lord Ganesh. During the yatra days, traders come here from various parts of the region to put up their stalls of clothes, shoes, woolens, utensils, etc. Like in a typical village fair, there are some traders who spread their wares on the floor, while others display their goods in colourful tents. There are stalls of food items too. You get no hamburgers or pizzas but desi hot jalebis, samosas and puris are available. It is a scene of a typical hill village fair. There is an air of festivity. Locals, yatris and other people from neighbouring areas come here.

There is much merrymaking with people doing the traditional Himachali dance, nati, and beating the drums. These celebrations are an annual feature of Bharmour. In the evening people gather in the compounds of the temples to attend aarti. The place reverberates with the ringing of bells, beating of drums and chanting of bhajans. With the temples and the surrounding area lighted, it looks like Divali time in this land of Lord Shiva.

There are no posh hotels or restaurants in Bharmour. There are guest houses of the PWD and the Forest Department. Most of the yatris spend the night in the temple compounds. Some even camp in the open area on the ridge near the helipad. They brave the weather singing devotional songs. Bharmour, at a height of about 2000 mt above sea level, remains covered with snow from March to November.

Another remarkable feature of Bharmour which requires mention is the temple of a Bharmani Mataa, which can be reached by climbing a steep path of almost four kilometres on foot. It is considered auspicious to take a dip in the holy pool of the temple. The effort of climbing is also rewarded by the food or tea offered at the langar there. The view of the place is a treat to the eyes: open and wide meadows, gurgling streams apple-laden trees and hilltops surrounded by snow-peaked mountains.