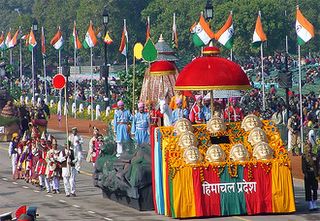 Few kilometers and you start passing through various temples.

Whether it was Ravanna who got his wish by worshipping at Baijnath Shiva Temple, Pandavas who passed their exile from Kauravas to still visiting almost all of the great saints, Himachal is indeed land of Gods. Once inhabited by Gods this state still seems to be!

Village Gods, the smaller yet powerful ones! Every year after months of hardwork in the fields and orchards, there comes the month of Phalgun (mid February to mid March) that marks the beginning of fairs and festivals in the valley. These fairs and festivals are mostly held to celebrate the victory of good over the evil or recall any episode related to the deities. They celebrate the rich cultural and traditional inheritance of the people, which they have been maintaining since epochs.

Dusshera is a unique fair held every year in October. It is a beautiful amalgam of history, rich culture and customs. Unlike other regions of India here effigies of Ravana, Meghnath and Kumbhakarana are not burnt. This is how victory of good over evil is depicted. Kullu Dusshera starts usually on the day it ends in the rest of the country.
It all started back in 1637 A. D. when Raja Jagat Singh was the ruler of the Valley. One day he came to know that a peasant Durga Dutt of village Tipri owned beautiful pearls, which the Raja wanted to obtain. Durga Dutt tried to convince the Raja by all means that the information was wrong and that he owned no pearls, but all his pleas were in vain.
The Raja gave him a last chance. Durga Dutt got so scared that he burnt down his own family and house and cursed the Raja for his cruelty. His curse resulted in Raja’s leprosy and as he realized the fact he felt guilty.

Kishan Das known as Fuhari Baba advised him to install the famous idol of Lord Raghunathji to get rid of the curse of the peasant. He sent Damodar Dass to steal the idol from Tret Nath Temple of Ayodhya who finally brought it from there in July 1651 A. D. After installing the idol he drank Charnamrit of the idol for several days and was in due course cured. He devoted his kingdom and life for the lord and from then onwards Dusshera started being celebrated with great splendor. Thus on the first fortnight of Ashwin month (mid September to mid October), the Raja invites all the 365 Gods and Goddesses of the Valley to Dhalpur to perform a Yagna in Raghunathji’s honor.
On the first day of Dusshera Goddess Hadimba of Manali comes down to Kullu. She is the Goddess of the royal family of Kullu. At the entrance of Kullu the Royal Stick welcomes her and escorts her to the Palace where the royal family awaits her at the entrance of the Palace. Thereafter they enter the Palace only when goddess Hadimba calls them inside. After blessing the royal family she comes to Dhalpur.
The idol of Raghunathji is saddled around Hadimba and placed in a Ratha (chariot) adorned beautifully. Then they wait for the signal from Mata Bhekhli, which is given from top of the hill. Next the Ratha is pulled with the help of ropes from its original place to another spot where it stays for the next six days. The male members of the royal family leave the palace and stay in the Dusshera ground.

More than one hundred gods and goddesses mounted on colorful palanquins participate in this procession. The ceremony feels as if the doors of heaven have been opened and the gods have come down to the earth to rejoice.On the sixth day of the festival, the assembly of Gods takes place, which is called ‘Mohalla’. It is an impressive and a rare sight to see the multihued palanquins of Gods around the camp of Raghunathji. People usually dance the whole night through. On the last day the Ratha is again pulled to the banks of river Beas where a pile of thorn bushes is set on fire to depict the burning of Lanka. Some animals are sacrificed and the Ratha is brought back to its original place. Raghunathji is taken back to the temple in Raghunathpur. Thus world famous Dusshera comes to an end in a dignified way, full of festivities and grandeur.

The Dhalpur grounds are full of vendors who come from different parts of the country to sell their goods. Various government organizations and private agencies also set up various exhibitions concerning their line of work. At night thousands of people witness the International Cultural Festival in Kala Kendra (an open-air theatre).
Kullu Dusshera ends all the fairs and festivals celebrated in the valley.