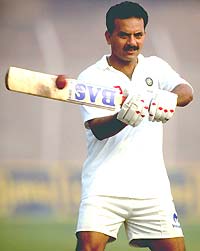 Madhi Bhaa, as Madan Lal is fondly called, scored 10,204 runs with 22 hundreds, 50 half-centuries and a top score of 223. He is a proud Himachali, who was born in Amritsar. Madan Lal was a member of the famous World Cup winning team of 1983. He was also awarded the Cricketer of the Year” award in 1976.

For many years one of the leading utility players in the country, he proved his value to the team with his courageous middle-order batting and his nippy medium-pace bowling. He was useful both in Test cricket as he proved while bowling India to victory over England at Mumbai in 1981 and by rescuing the country by scoring a gallant 74 against Pakistan at Bangalore in 1983 and in the one-day game.He was one of the heroes of the 1983 World Cup and earned a name for himself by his spell of three quick wickets that dealt a crushing blow to the West Indies batting in the final.

At the domestic level, he was both a prolific run-getter and regular wicket-taker, frequently rescuing his team from a bad start by taking some quick wickets. His all-round record in the Ranji Trophy 5270 runs and 351 wickets is one of the best in the national competitions. After retiring from cricket, he did a stint with the UAE team and the India as a coach, before being appointed India seniors coach during 1996-98.